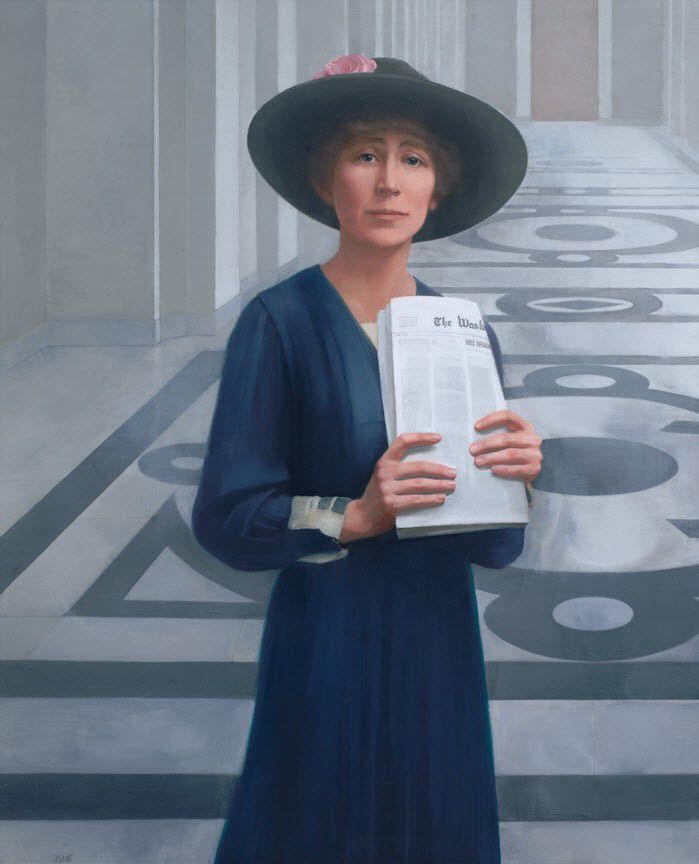 A 2004 portrait by Sharon Sprung shows Rankin early in her political career. 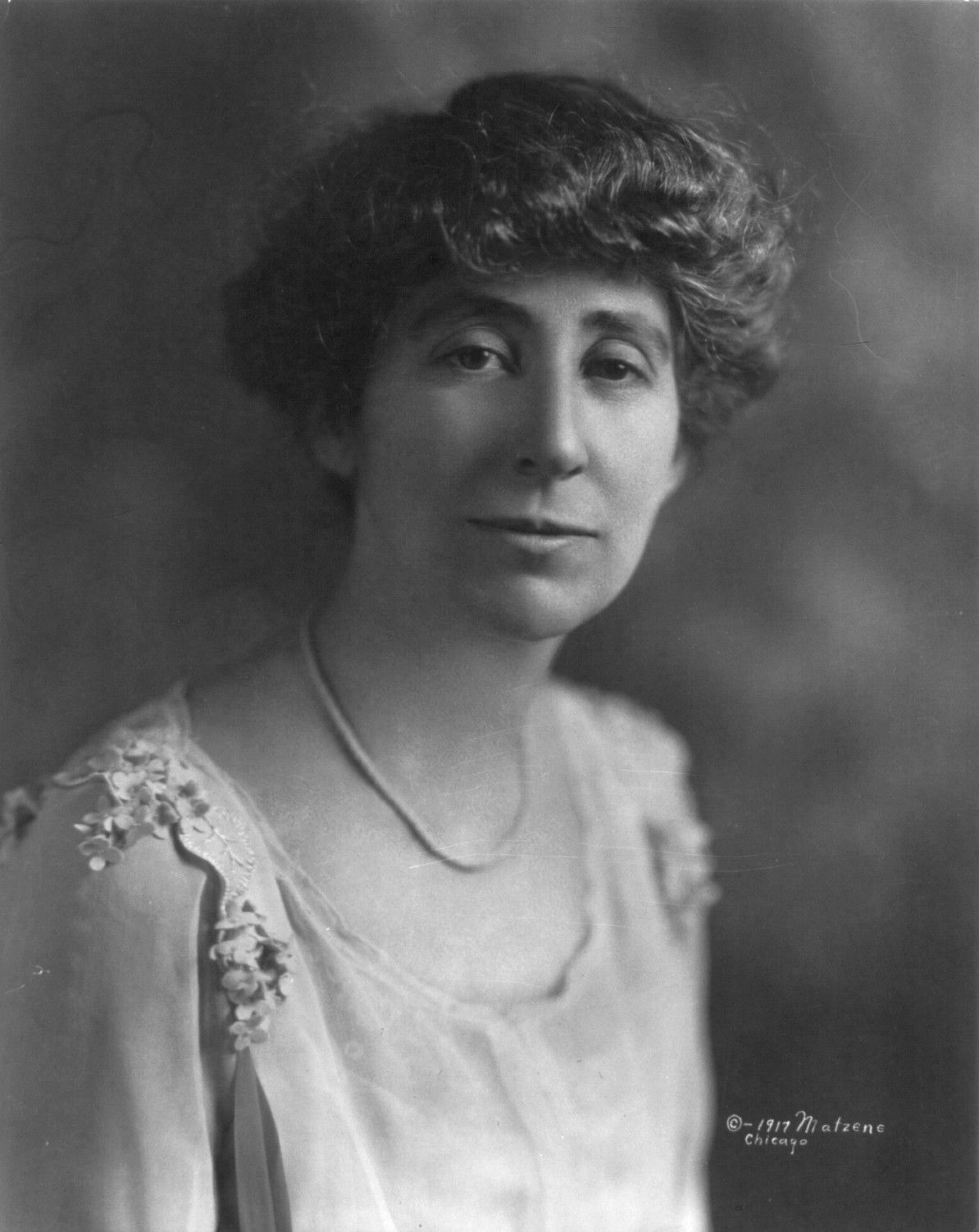 When Jeannette Rankin was sworn in on April 2, 1917 (the year this photograph was taken), the applause in the House chamber continued until she rose twice to bow. Rankin was elected on Nov. 7, 1916. 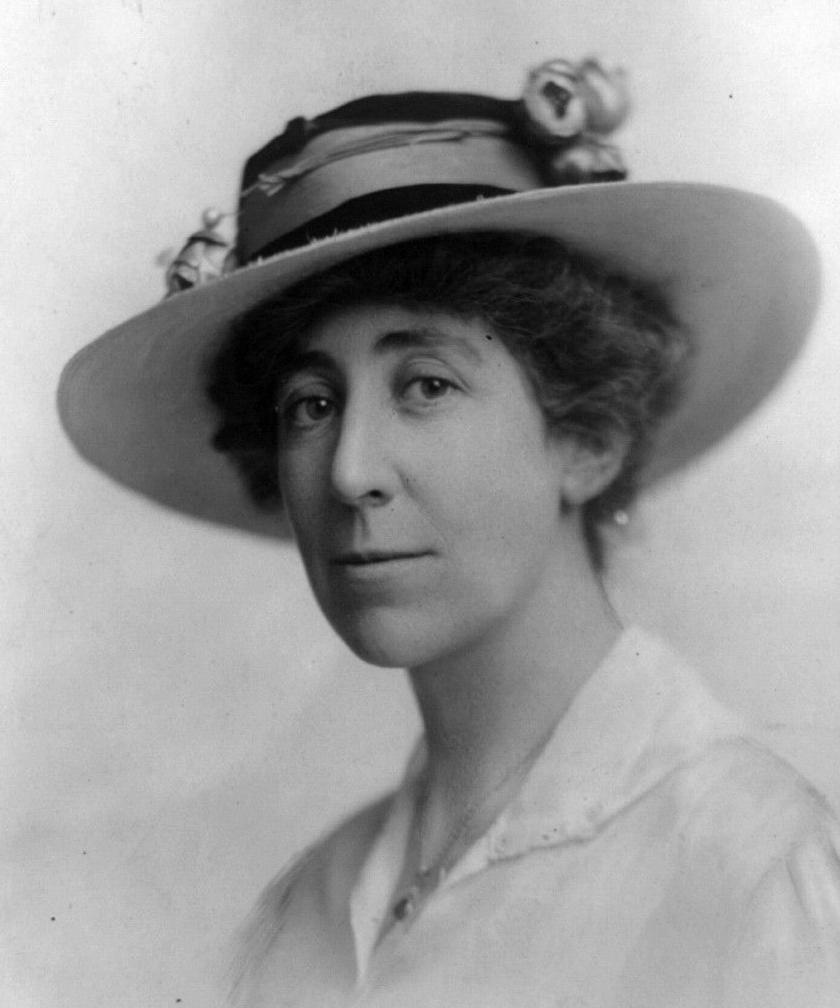 Jeannette Rankin ran as a suffragist Republican, while also working on other social welfare issues. 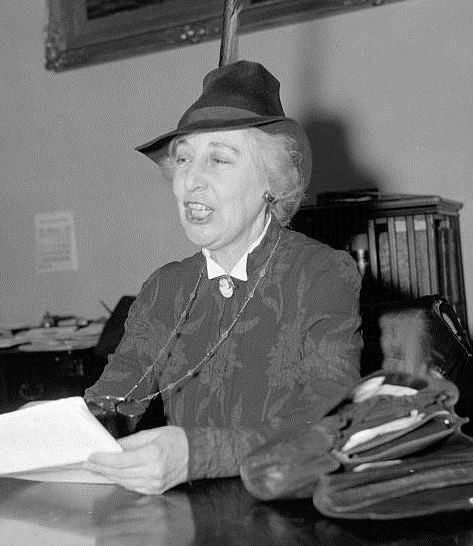 By 1940, with Europe again consumed in war, she saw growing Montana support for her anti-war stance, and decided to run again for office.

A 2004 portrait by Sharon Sprung shows Rankin early in her political career.

When Jeannette Rankin was sworn in on April 2, 1917 (the year this photograph was taken), the applause in the House chamber continued until she rose twice to bow. Rankin was elected on Nov. 7, 1916.

Jeannette Rankin ran as a suffragist Republican, while also working on other social welfare issues.

By 1940, with Europe again consumed in war, she saw growing Montana support for her anti-war stance, and decided to run again for office.

Montanans are rightly proud of the legacy of Representative Jeannette Rankin, who was first elected 100 years ago this fall the first female in Congress. In our rush to admire the qualities of this uniquely principled trailblazer, we rarely acknowledge the tension inherent in her story.

Rankin was both a feminist and a pacifist—and those two causes didn't always mesh.

The first woman ever elected to national office, Rankin served two terms as a Montana representative in the U.S. House. Elected once in 1916 and again in 1940, she ended up serving during two historically consequential votes. Today she is perhaps best known as the only member of Congress to vote against both World War I and II.

Yet Rankin didn't want events to turn out that way.

She set out to bring women suffrage.

"If I am remembered for no other act," she told the Montana Constitutional Convention in 1972, "I want to be remembered as the only woman who ever voted to give women the right to vote."

Rankin was born near Missoula in 1880 to a relatively wealthy family. After college she trained as a social worker, and while working in Washington state became involved in the suffrage movement. Before women achieved the right to vote nationally, they achieved suffrage in several individual states, including Washington in 1910 and Montana in 1914. As a lobbyist, speaker and organizer, Rankin contributed to both those victories.

In 1916, she decided to run for Congress. The pool of Montana voters had doubled; she had all that organizing experience; her brother Wellington had become a wealthy political power broker who wanted to finance her campaign. She ran as a suffragist Republican, pledging to fight for a Constitutional amendment to give the franchise to women nationwide, while also working on other social welfare issues. She didn't hide her opposition to the already-raging European war, but it wasn't much of an issue. In the same election, Democratic President Woodrow Wilson won a second term on the slogan, "He kept us out of war."

Rankin campaigned hard, traveled everywhere, met everyone. The Election Day tally was close, and she went to bed that night thinking she had lost. But buoyed by female voters in rural eastern Montana, she won one of two at-large seats—and was suddenly one of the most famous women in the country, the first female anywhere elected to a national legislative body. When she was sworn in on April 2, 1917, the applause in the House chamber continued until she rose twice to bow.

But world politics had changed in the five months since the election. Throughout the Atlantic Ocean, German submarines were attacking ships regardless of nationality. Four days later Wilson called a special session, asking Congress to declare war on Germany and thus "make the world safe for democracy."

How should Rankin vote? Some believed she should take the "manly" stance for war, to strengthen the suffragist cause by showing that women would not vote differently than men. Or perhaps her vote should account for the interests of Montana's mining companies, including the powerful Anaconda Copper company, which would profit from munitions. On the other hand, it was not clear that Montana's voters, half of whom were foreign-born, really wanted to jump into Europe's war. (The mail she later received suggested not.) In the end she voted her conscience.

“I want to stand by my country, but I cannot vote for war,” she told the House. “I vote no.”

She was joined by 49 other Representatives, and six Senators. But all those others were men. As a woman, Rankin bore the brunt of criticism that she represented the weakness and failure of her gender. It was a turning point in her service, after not even a full week.

Later in her term, Rankin opened the debate, and voted affirmatively, on a Constitutional amendment for women's suffrage. “How shall we answer the challenge, gentlemen?” she asked. “How shall we explain to them the meaning of democracy if the same Congress that voted to make the world safe for democracy refuses to give this small measure of democracy to the women of our country?”

The initiative passed the House, but failed in the Senate. In 1919 it passed both houses, and after ratification became the Nineteenth Amendment, but by then Rankin was out of office. She was a victim of redistricting, as Montana switched from the at-large system into eastern and western districts. But also, now that the bloom was off the suffragist rose, Montanans were willing to go back to traditional politicians

In the 1920s and '30s, Rankin did some speaking and lobbying and built a winter home in the Georgia countryside, while summering on brother Wellington's ranch. By 1940, with Europe again consumed in war, she saw growing Montana support for her anti-war stance and decided to run again for office. She made a deal with the Anaconda company, which owned most of the state's major newspapers: If they supported her, she would serve only one term, and let the former mine-mucker Mike Mansfield take over in '42.

Garnering 54 percent of the vote, she returned to her old job.

“No one will pay any attention to me this time,” she predicted. “There is nothing unusual about a woman being elected.”

But once again events overtook her. Nine months into her term, a President again came to Congress to ask for a declaration of war. Rankin again voted "no."

However, because it followed the attack on Pearl Harbor, this vote was less about entering a foreign war and more about defending American soil. None of her colleagues joined her. Her vote was met with hisses and boos, and she later needed a police escort back to her office.

“As a woman I can’t go to war, and I refuse to send anyone else," she later said. In private, she told friends, “I have nothing left but my integrity.”

When her term ended, she retreated to Georgia and Montana, keeping a low profile for more than 20 years. She traveled around the globe, especially to India, where she was an admirer of Mohandas K. Gandhi. In the late 1960s, with a new wave of feminists and war protestors, her stature rose again. In addition to the opportunity to address the Montana constitutional convention, she considered running a third time for Congress, this time opposed to the Vietnam War. But she was now in her 90s, and that was one ambition too far. She died in a California retirement home in 1973.

In 2016 Rankin's story has particular relevance—not only because we are celebrating the 100th anniversary of her first election, but also because this year’s election may involved some similar "firsts." (“History doesn't repeat itself, but it does rhyme,” as Mark Twain probably didn't say.)

Denise Juneau is seeking to be the first Montana congresswoman since Rankin. She's already the first American Indian woman in the country ever elected to an executive statewide office. She's now seeking to be the first female Native American in Congress. She's also Montana's first openly gay candidate for federal office. (Saying that a married woman lost her independence, Rankin refused to marry, reportedly even spurning fellow Congressman—and later New York mayor—Fiorello LaGuardia, whom she adored. Her stance prompted inevitable rumors about her sexuality, but little is known of her private life.)

And on the national level, of course, Hillary Clinton has an opportunity to become the first female president. For that matter, Clinton's opponent, Donald Trump, would be the first president to come straight from the private sector, without having held a significant elective, appointed, or military position.

Yet Rankin's story suggests that anyone we elect this year will eventually be remembered more for the unexpected events they have to deal with than for their biographical uniqueness. Election Day may mark a history-making event, but that historical chapter will likely end at the next president's swearing-in. Immediately thereafter—perhaps even, as in Rankin's case, that very week—our leaders will be called to make decisions about life-or-death matters that may have been tangential to their campaign policy stances, or to their personal histories.

That's a big part of what makes the American democratic system such a privilege. We grant power to regular folk, rather than royalty trained from birth. We use the electoral process to make candidates prove that they are deserving of this trust, and we reserve the right to change our minds in two to four years.

In 1918 and 1942, Montanans changed their minds about Jeannette Rankin. But in general, during the past century, history has remembered her warmly. She was neither venal nor corrupt. She voted her principles. She cared. Her quest for suffrage gained widespread acceptance; her quest for peace proved more quixotic. In hindsight, many more of us might join with her in that 1917 vote. And if fewer of us would join with her in that 1941 vote, we do look at it as one driven by ethics. Rightfully, nobody calls Rankin a traitor. We see her as a person of courage and integrity; indeed we understand that those qualities, along with hard work and good fortune, helped her achieve significant milestones.

Stephen Mather and The Founding of the National Park Service: 100 years of brand, strategy and self-less service

The long shadow of Willard Fraser: The legacy of Billings' greatest mayor

Resurrection on a bike

Then comes the fall: The sixth (and final) defeat of Willard Fraser