Skip to main content
You have permission to edit this article.
Edit
Stories
Rack Locations
Issues
About
Contact
1 of 4 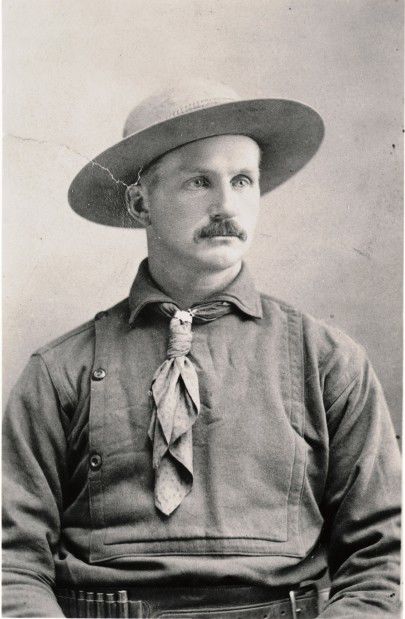 Howard Eaton, pictured here as a young man, is credited with being one of the first dude ranchers in the West. Eaton led many pack trips into Yellowstone National Park from the ranch he worked with his brothers near Sheridan, Wyoming. 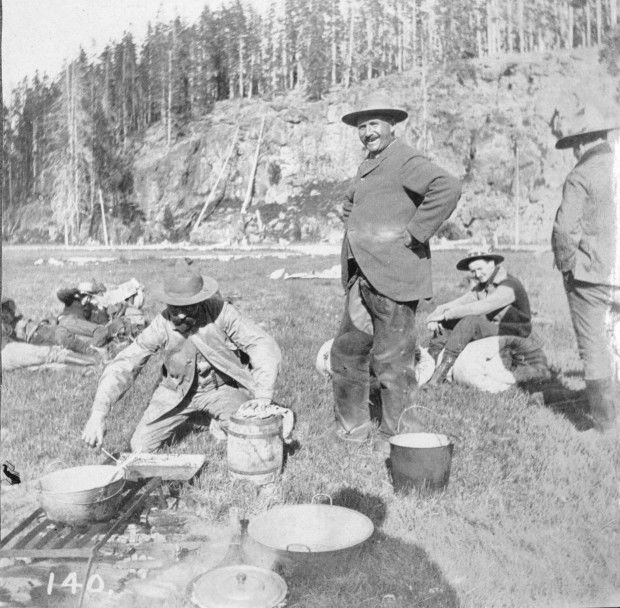 Howard Eaton, standing, is pictured in 1902 during a pack trip meal at Gibbon Meadows in Yellowstone National Park. 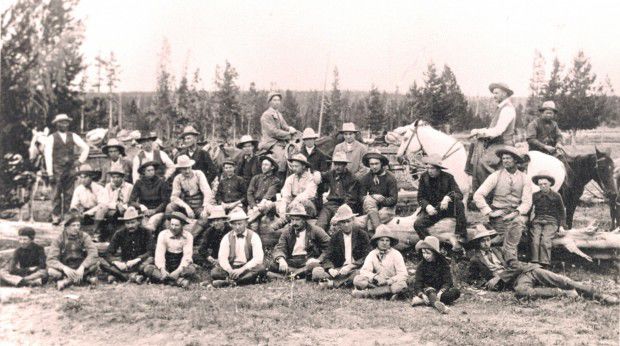 Horse packers and dudes pose for a photo with Howard Eaton, who is sitting atop his white horse at right, at a campsite in Yellowstone National Park in August 1899. 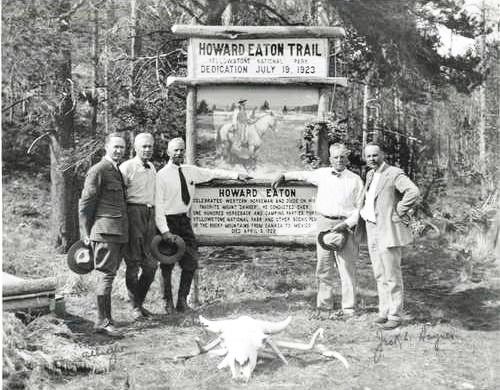 The Howard Eaton Trail was dedicated on July 19, 1923. Standing next to the sign at Sheepeater Cliff are Horace Albright, Stephen V. Mather, two of Howard Eaton’s relatives and Jack Haynes.

Howard Eaton, pictured here as a young man, is credited with being one of the first dude ranchers in the West. Eaton led many pack trips into Yellowstone National Park from the ranch he worked with his brothers near Sheridan, Wyoming.

Howard Eaton, standing, is pictured in 1902 during a pack trip meal at Gibbon Meadows in Yellowstone National Park.

Horse packers and dudes pose for a photo with Howard Eaton, who is sitting atop his white horse at right, at a campsite in Yellowstone National Park in August 1899.

The Howard Eaton Trail was dedicated on July 19, 1923. Standing next to the sign at Sheepeater Cliff are Horace Albright, Stephen V. Mather, two of Howard Eaton’s relatives and Jack Haynes.

Although he’s not necessarily a household name – even in the Treasure State – he was a man responsible for kindling a love of Montana from out-of-state tourists, greenhorns and dudes, who came here looking for the West of dime store magazines and literature and found something much more grand.

Eaton introduced out-of-towners to Western lifestyles and took them on life-changing tours of national parks more than 100 years ago. Not only was he first, but he also probably did it better than the rest of us, certainly with more patient good humor. Eaton arguably founded the industry of dude ranching, which was a grandparent to most forms of Western tourism in Montana today.

Raised in a wealthy Pittsburgh family, Howard arrived in Medora, North Dakota, in 1879 to start a ranch. He was 28. Soon two brothers, Willis and Alden, joined him. In those days, the plains teemed with bison and other wildlife that attracted the world’s greatest hunters. A letter from Howard to a friend in New York prompted one such hunter, the young Theodore Roosevelt, to make his first visit to the area.

Both before and during Roosevelt’s stint living on a neighboring ranch, the Eatons found themselves regularly entertaining friends from the East. Some friends offered money to cover their expenses, especially in 1883 when several accompanied Howard on a pack trip to Yellowstone. As cattle ranching proved a dicey proposition, the Eatons started making better income from visitors.

Eaton was a husky man, tanned and blue-eyed, with a high-pitched voice and a powerful handshake, who had boundless reserves of hospitality that made him the public face of the family operation. Howard loved outdoor living and sharing that lifestyle with others.

Among the ranch’s 1880s guests were a great number of restless teenage boys, whose parents sent them West to keep them out of trouble. Staff at the ranch - nicknamed “savages,” like staffers at Yellowstone — noticed how enthralled the visitors were with immense hats, big revolvers, rattlesnake belts, leather chaps and other accouterments of ranch life. The boys dressed colorfully— far more “cowboy” than any cattle tender did. In the wider culture, dude at the time referred to an overdressed fop, but when the genial Howard called someone a dude or for that matter a savage, the terms were scrubbed of derision.

Bison were a huge draw for early tourists. As the shaggy creatures vanished from their former range, it must have been emotionally devastating for the Eatons and their guests. Sadly, Howard never wrote a memoir, but the strength of his feeling for bison does show up in documentary records. In 1902, after a rancher named Charles Allard died, the herd of purebred bison that Allard and partner Michael Pablo had built in northwestern Montana was put up for sale. Howard bought 18 of the animals. Later that year he sold them to Yellowstone, where they mixed with three bison from Charles and Mary Goodnight in Texas. These animals and their descendants were held in enclosures at Mammoth Hot Springs and later in the Lamar Valley.

That bison herd is often credited with saving the species from extinction, although other, never-corralled bison also existed in the Yellowstone backcountry. In particular, Pablo, Allard and the Goodnights get a lot of credit, as do conservation activist George Bird Grinnell and the self-promoting Yellowstone employee Charles J. “Buffalo” Jones. Not enough credit goes to Howard Eaton. Granted, he was little more than a middleman, and he may have been self-interestedly hoping to keep bison around to entertain his tourists. (He also kept bobcats and bears in cages at the ranch, a mini-zoo.) But sometimes self-interested middlemen are just what a threatened species needs.

Largely due to the loss of North Dakota’s wildlife, in 1903 the Eatons’ ranch moved to the east slopes of Wyoming’s Bighorn Mountains. They located 18 miles west of the rail line in Sheridan, with a mountain setting for horseback riding, trout fishing and big game hunting. Here, they continued to build their clientele among wealthy Easterners.

It was a golden era for Western tourism. The region was no longer bedeviled by marauding hooligans or dangerous predators such as wolves and grizzlies; meanwhile expanding rail networks made access easier than ever. Every summer Howard would pack dudes, horses and gear on a train through Billings to Yellowstone, where they made a set tour through the geyser basins, lakeside and canyon. He often took two weeks, twice the standard park sojourn. Every night in camp Howard told magnificent stories of the old days in the West. Sometimes he was joined by guest storytellers, including the famed painter Charlie Russell.

Soon a dozen additional dude ranches opened in the Sheridan area, some run by his former employees or dudes. More opened in the Cody, Jackson, Gardiner and Red Lodge areas, among others. But dude ranching was such a clubby business, with new guests always coming by referral, that it didn’t seem much like competition. For example, the Eatons continued to draw from Pittsburgh, decades after they’d moved west. In Jackson, Struthers Burt drew most of his dudes from his former Philadelphia home; in Cody, Larry Larom drew from New York.

In effect the dude ranchers were re-creating a less-risky version of frontier life. They had a high regard for history and the characters who had lived through it.

Howard Eaton had been around long enough to be part of that history as well as the nostalgia for it. In a 1924 memoir titled, "Diary of a Dude Rancher," Struthers Burt wrote that Howard was “one of the great figures of the West… a more engaging and important person than Buffalo Bill (Cody).”

Dude ranching grew in part because these entrepreneurs understood their operations as different from the traditional hunting camp. They appealed to women and families, with relatively luxurious accommodations and activities centered around horseback riding and sightseeing rather than just hunting. They thus attracted repeat customers, with some kids feeling like they grew up on the dude ranch.

Many reported fond memories of “Uncle Howard.” Neither Howard nor his brother Willis ever married or had children, but their avuncular dispositions made them widely loved. A dude would always find a blanket or an encouraging word, a warm meal or a funny story.

Although dude ranches never accumulated a large percentage of total tourist traffic, their elite patrons meant that they punched above their weight. For example, acclaimed author Mary Roberts Rinehart published a 1916 travelogue titled, "Through Glacier Park: Seeing America First with Howard Eaton." The Eatons’ friendships with visual artists, such as Russell and Joe DeYong, also boosted their profile.

The romance of the Old West was a big part of dudes’ attraction. Indeed, the Eatons continued taking dudes through Yellowstone on horseback long after automobiles were allowed into the park. Because horses would be spooked by cars, their standard route followed a trail parallel to the figure-8 of automobile roads. After Howard’s death in 1922 — of appendicitis at age 71 — the park reverentially dedicated this path as the Howard Eaton Trail.

In describing how Howard could “keep a crowd entertained for a year with stories of Indian fights, buffalo running, big game hunting, and tales of interesting characters he has met and acted as guide for,” a 1920 Outing Magazine profile noted, “His experiences would fill a book.”

But Howard never wrote that book. Into his 70s he was still riding, camping, guiding, joking, befriending—living. He created the template not only for Western hospitality but also for taking the fullest pleasure in a rugged outdoor life.