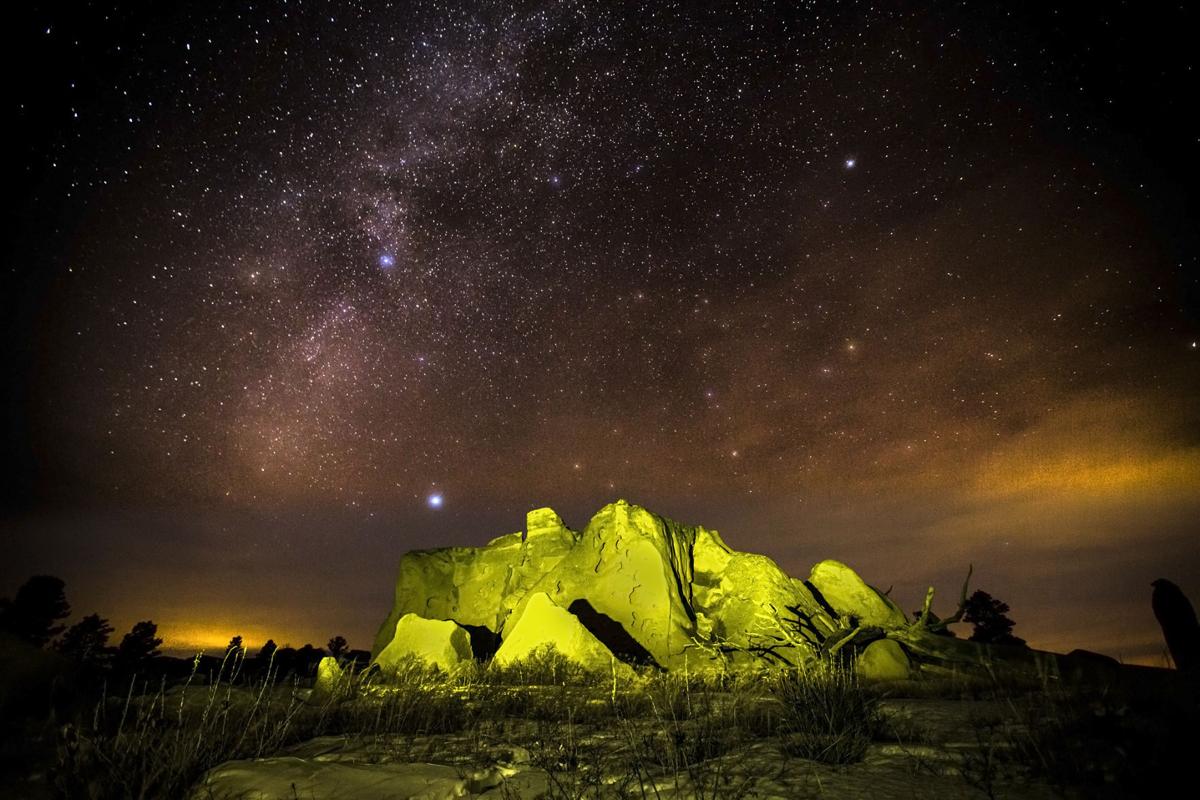 Pictured behind a sandstone medicine rock is the Milky Way. 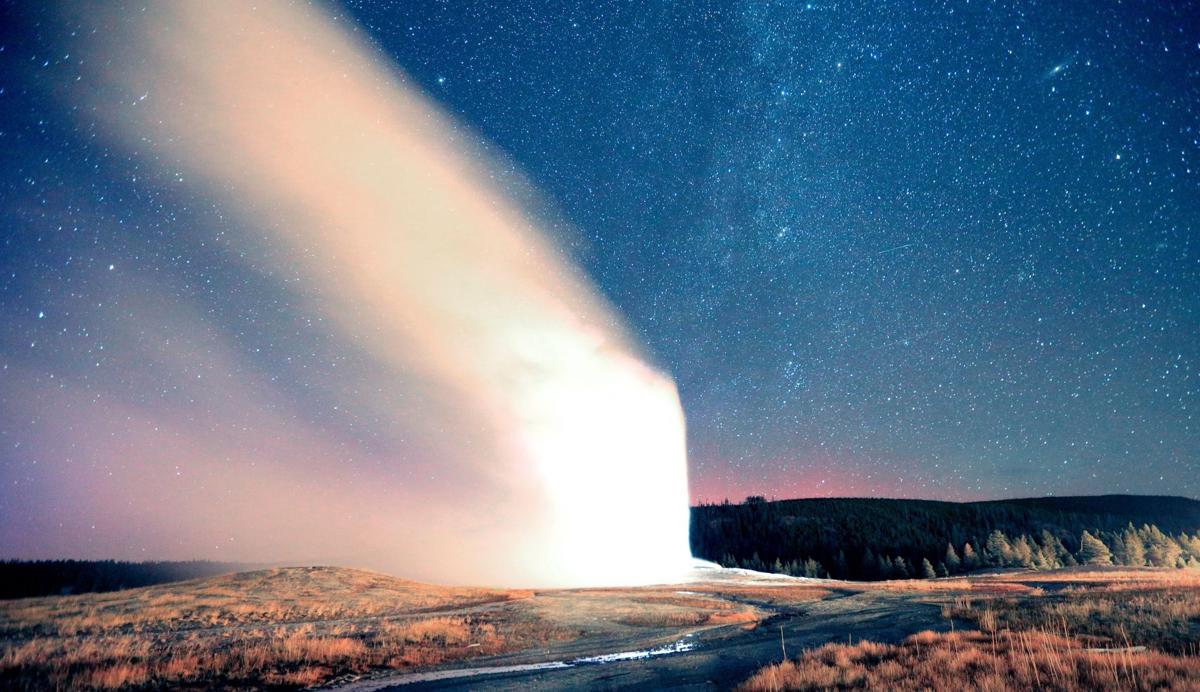 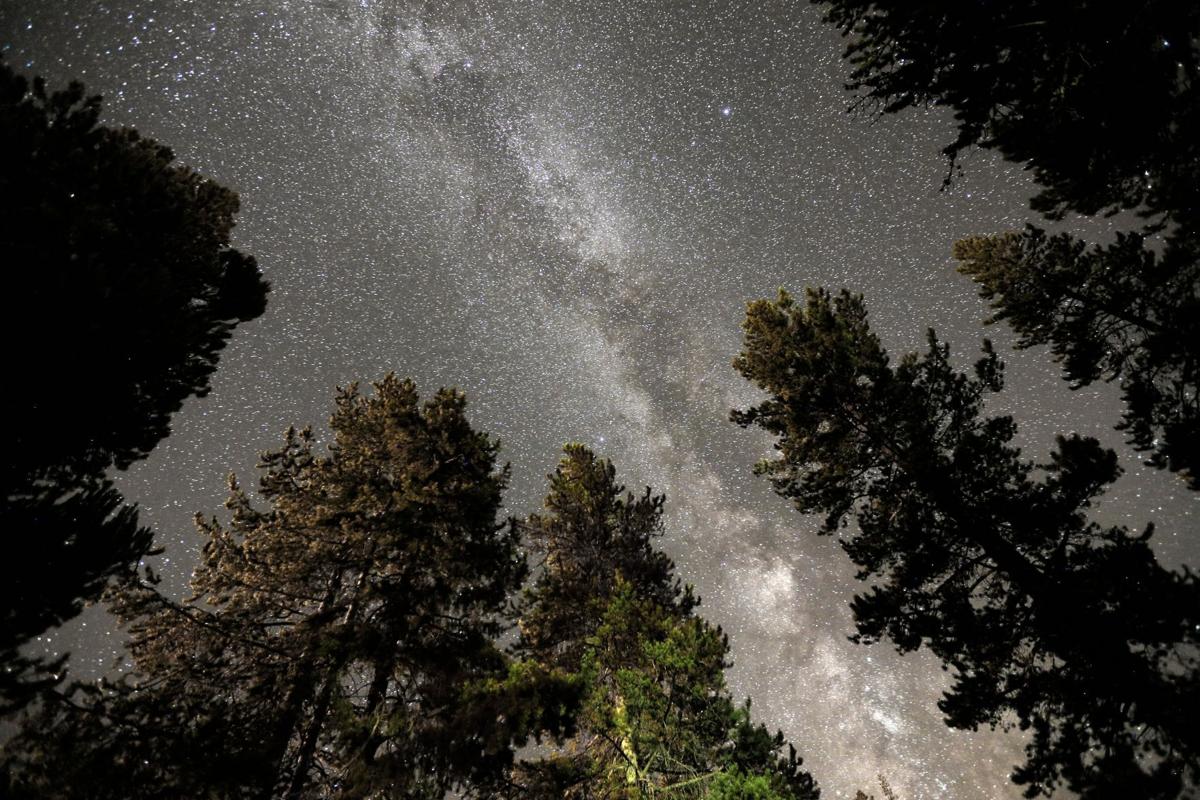 Shining through the trees in Yellowstone National Park is the Milky Way. 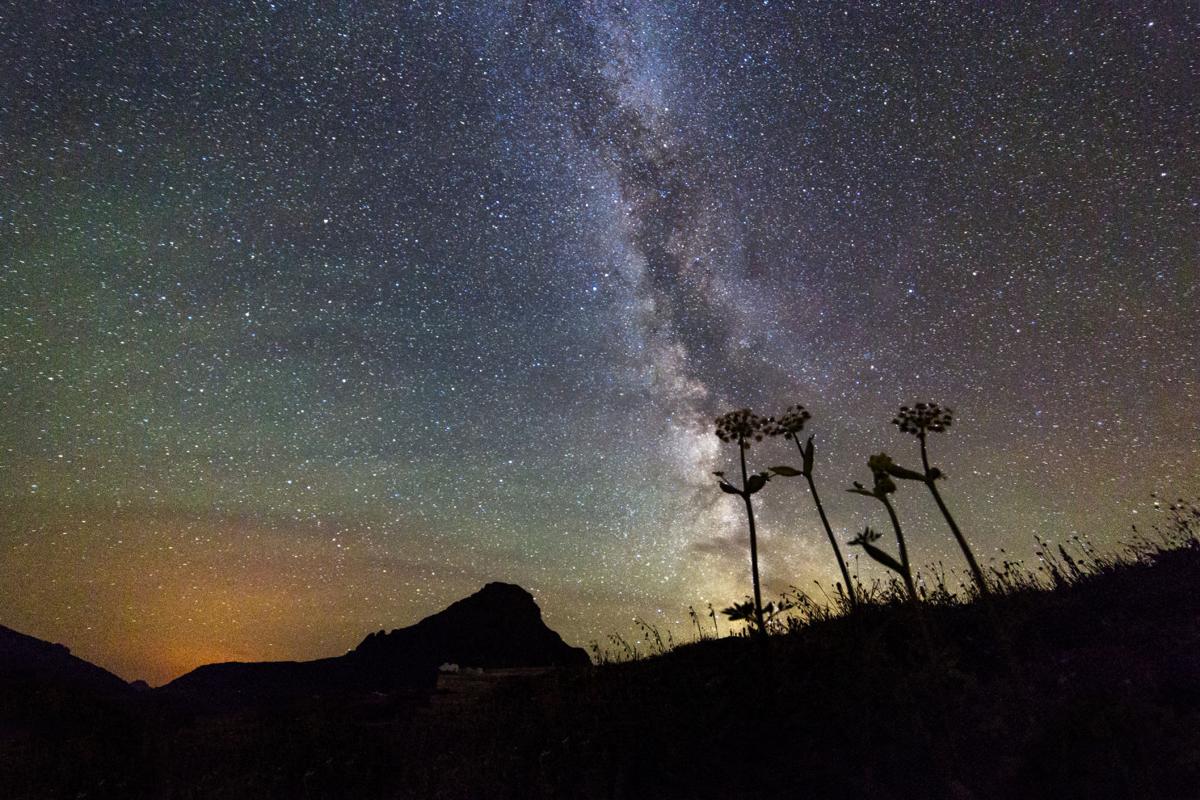 Flowers silhouetted against the night sky in Glacier National Park. 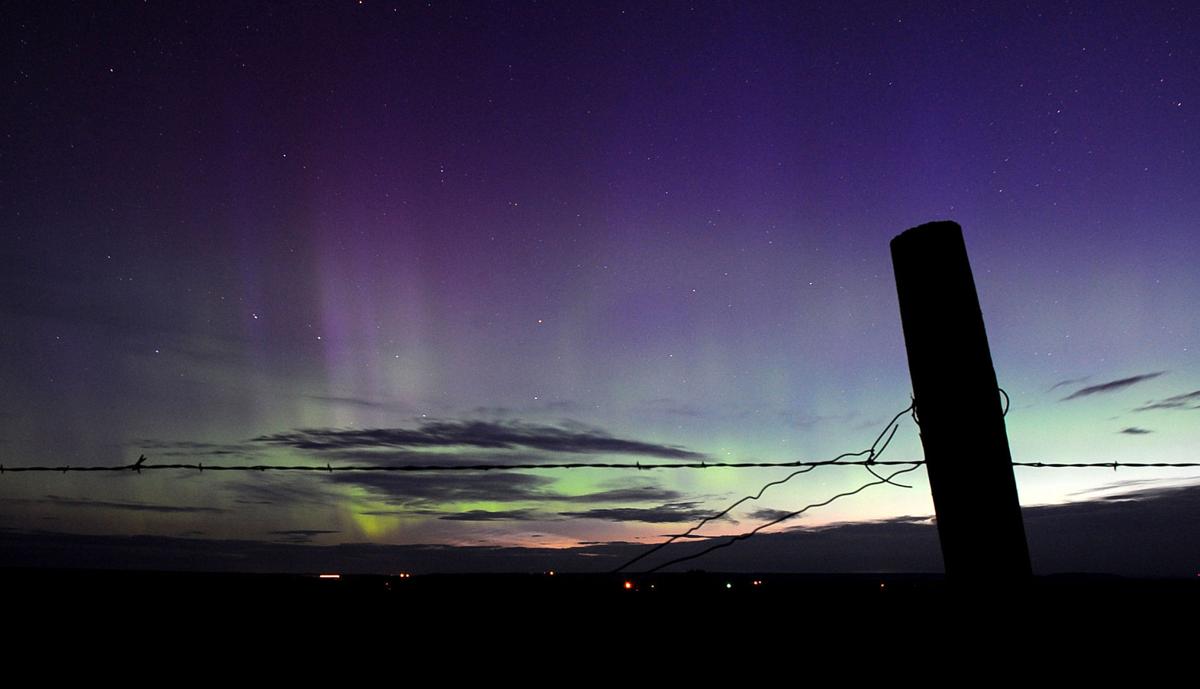 An early morning Northern Lights display off of Highway 3 near Billings in July 2012. The Big Dipper can be seen in the center of this 30-second exposure. 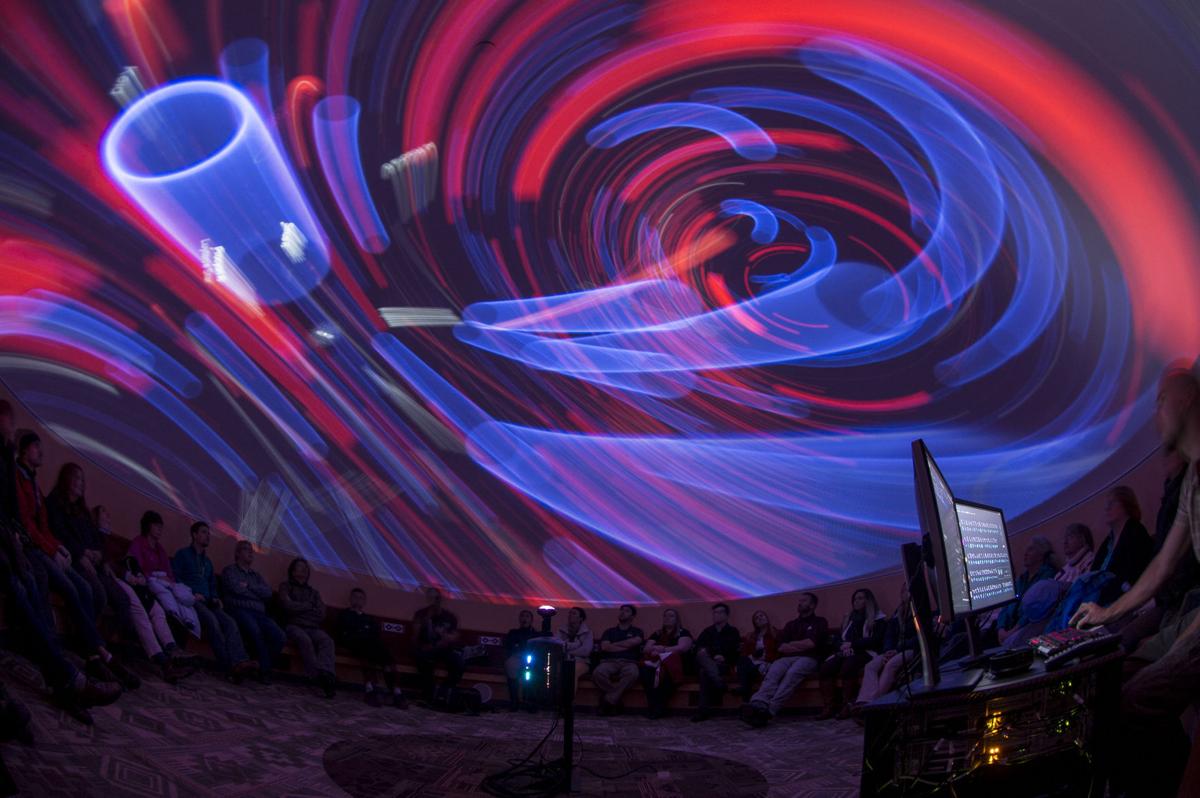 The Taylor Planetarium at the Museum of the Rockies hosts programs on outer space. 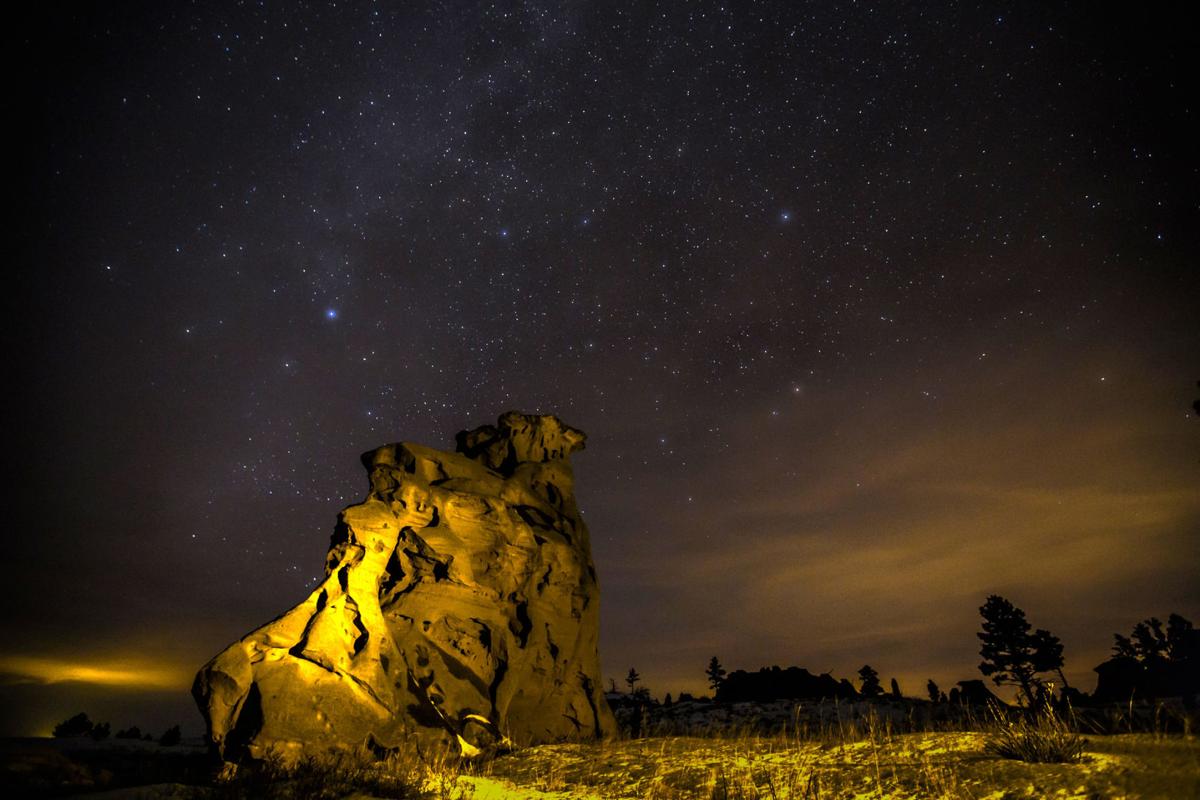 The Milky Way hides behind a sandstone Medicine Rock painted with a yellowish light. 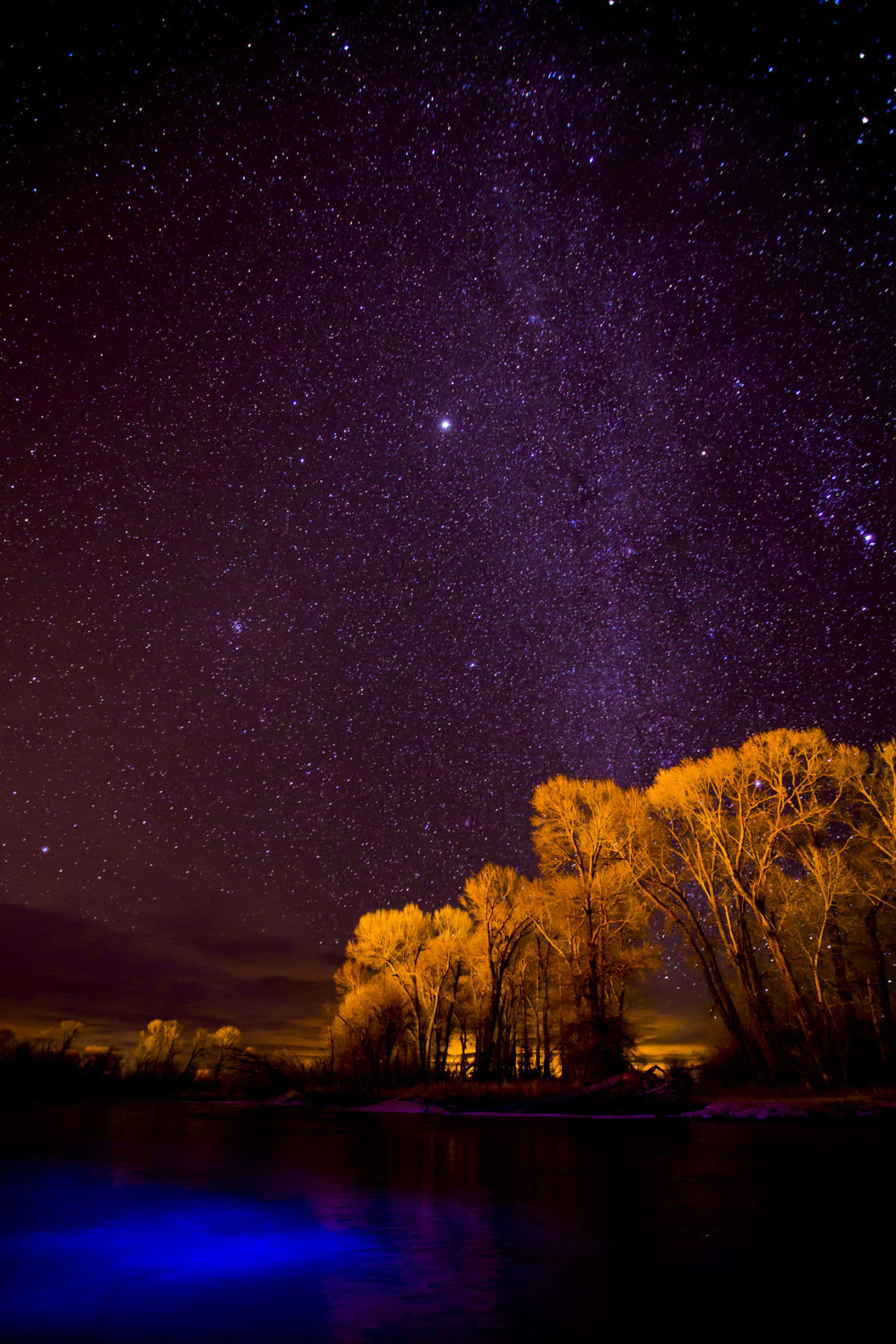 The glow from Harlowton lights the trees along the shore of the Musselshell River in Chief Joseph Park. Behind the trees is the Milky Way. 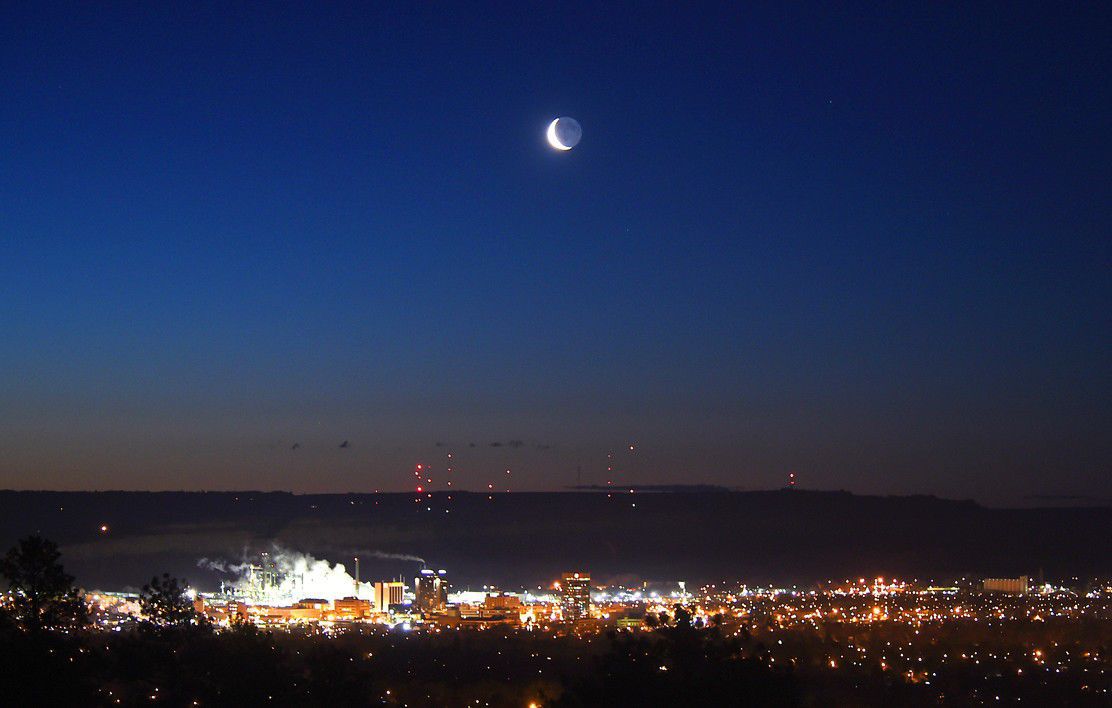 The moon rises over Billings. 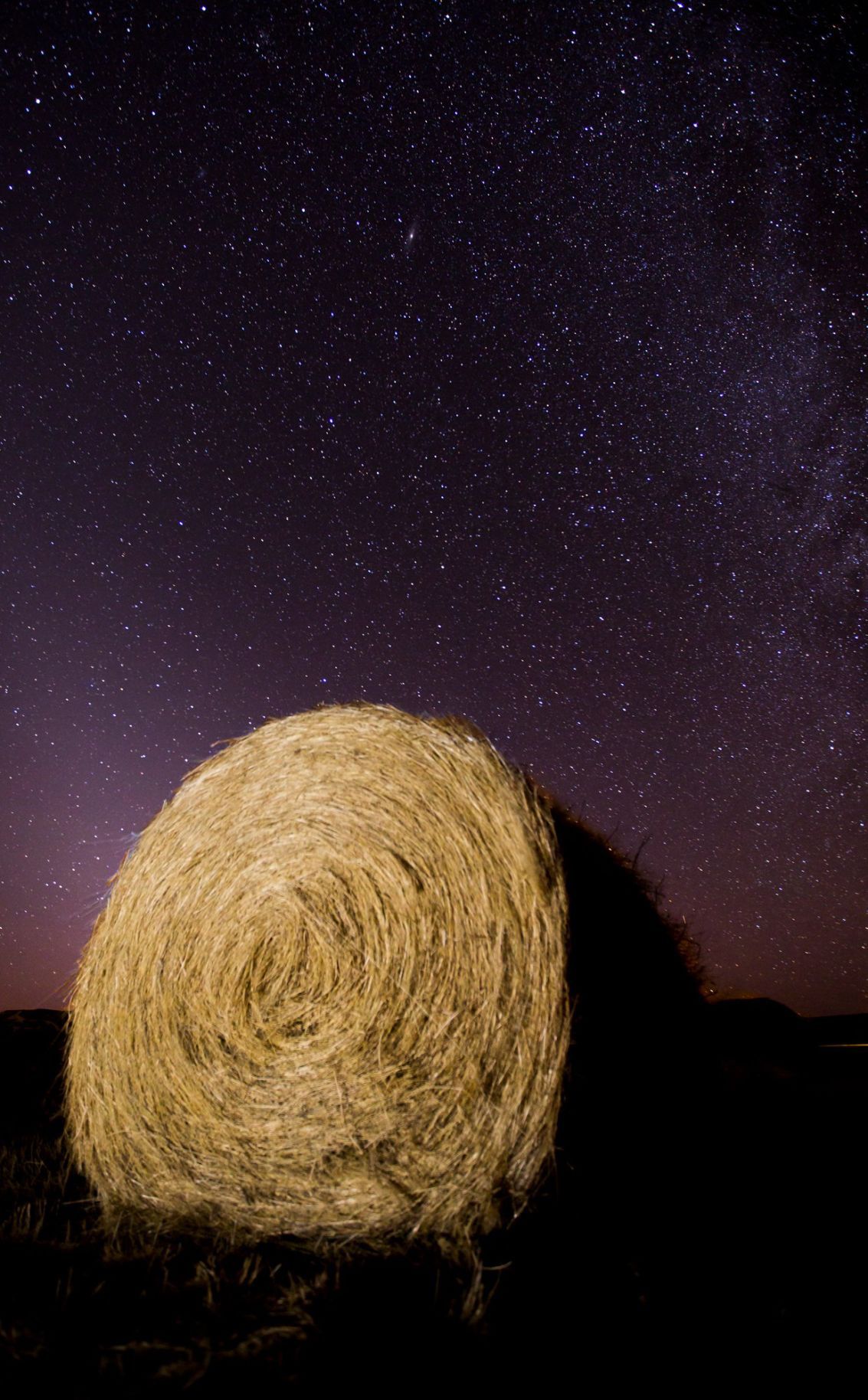 Stars surround a hay bale in a field off of Highway 191 . 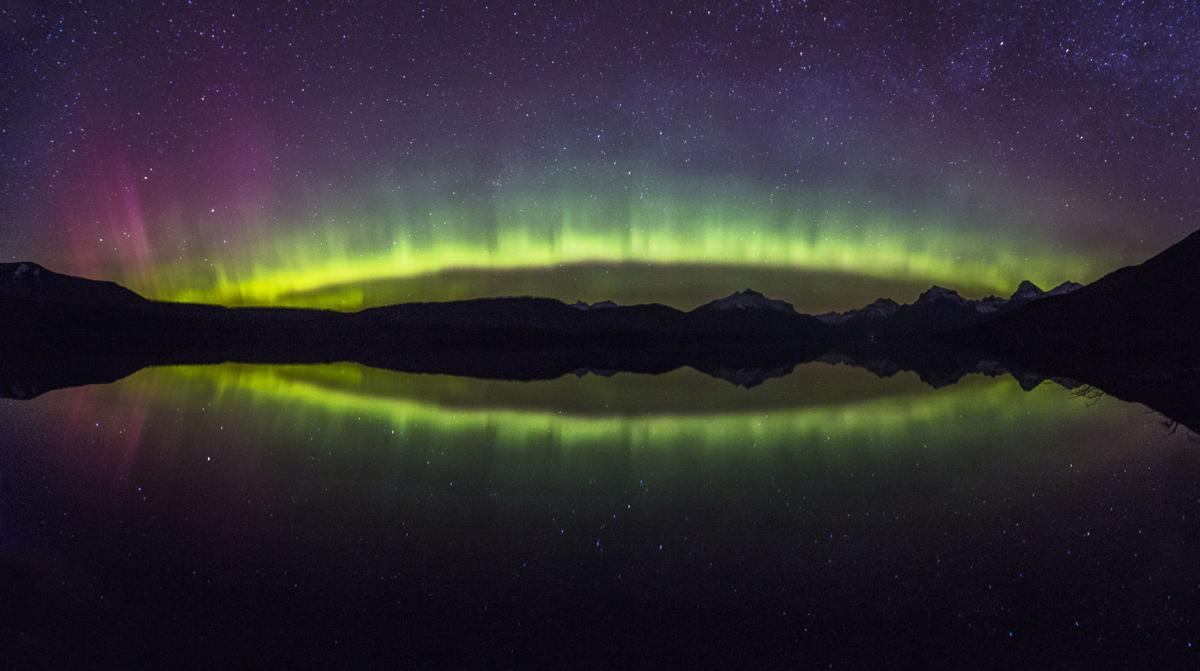 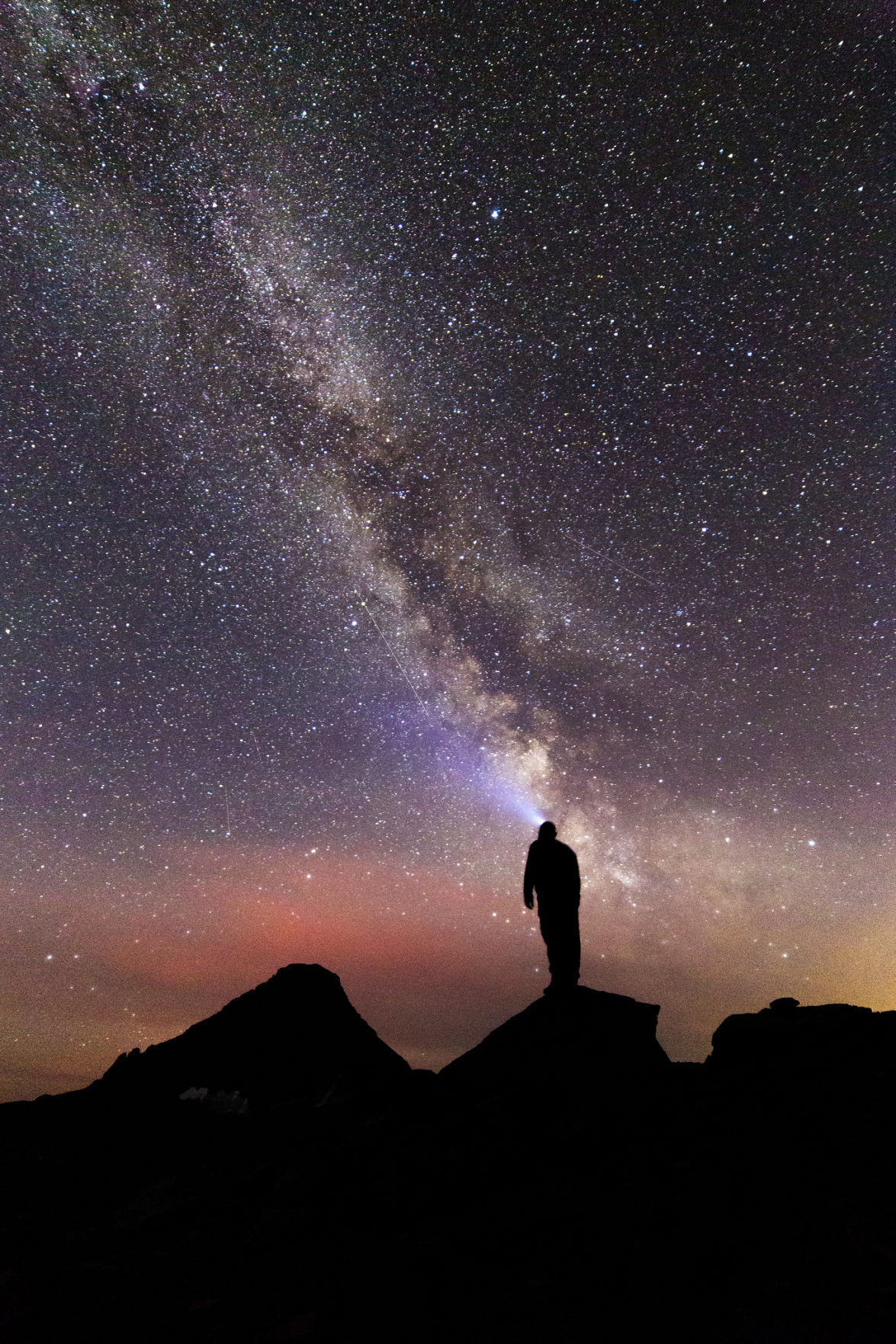 A hiker looks at the Milky Way in Glacier National Park. 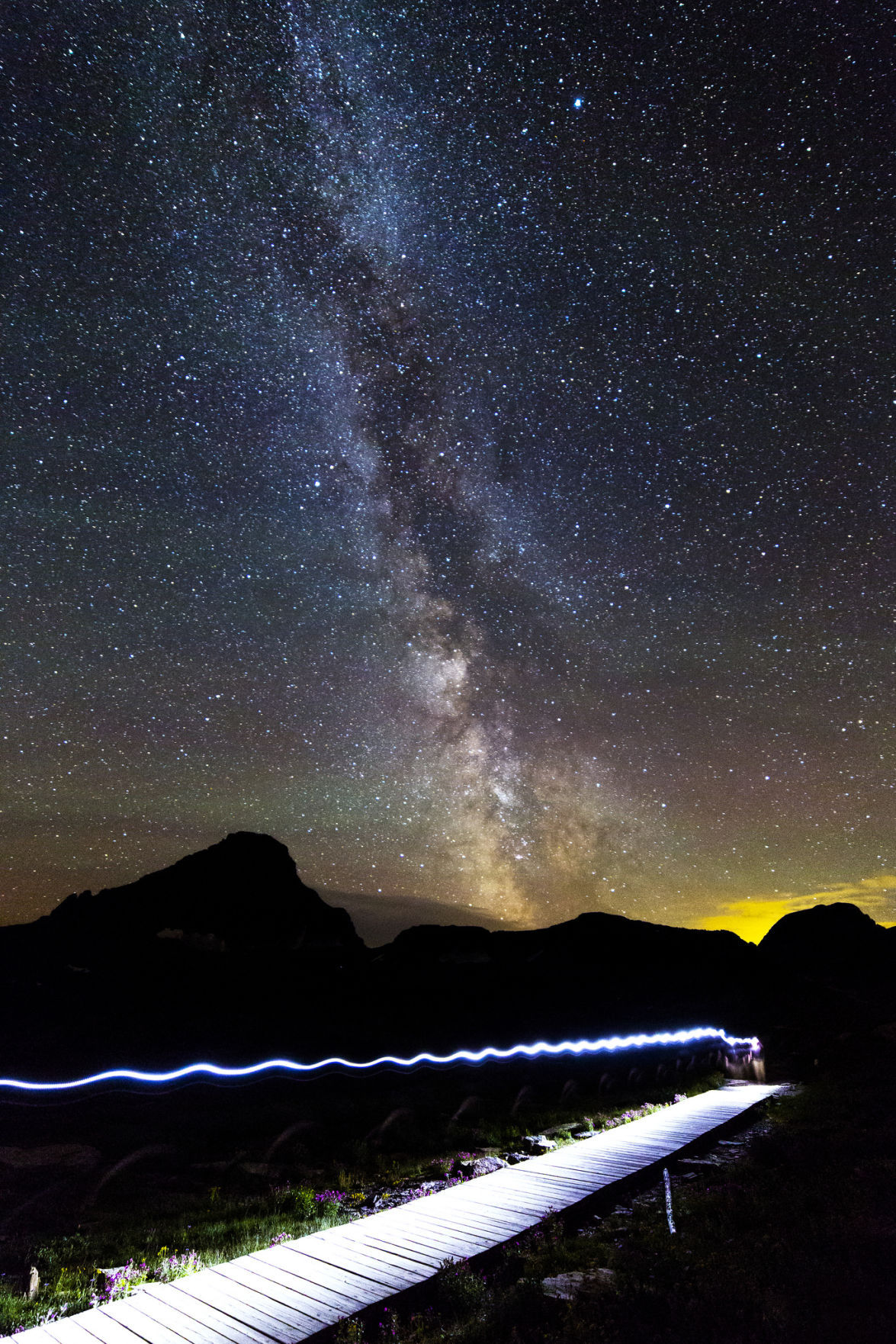 A hiker walks beneath the Milky Way and a meteor shower in Glacier National Park. 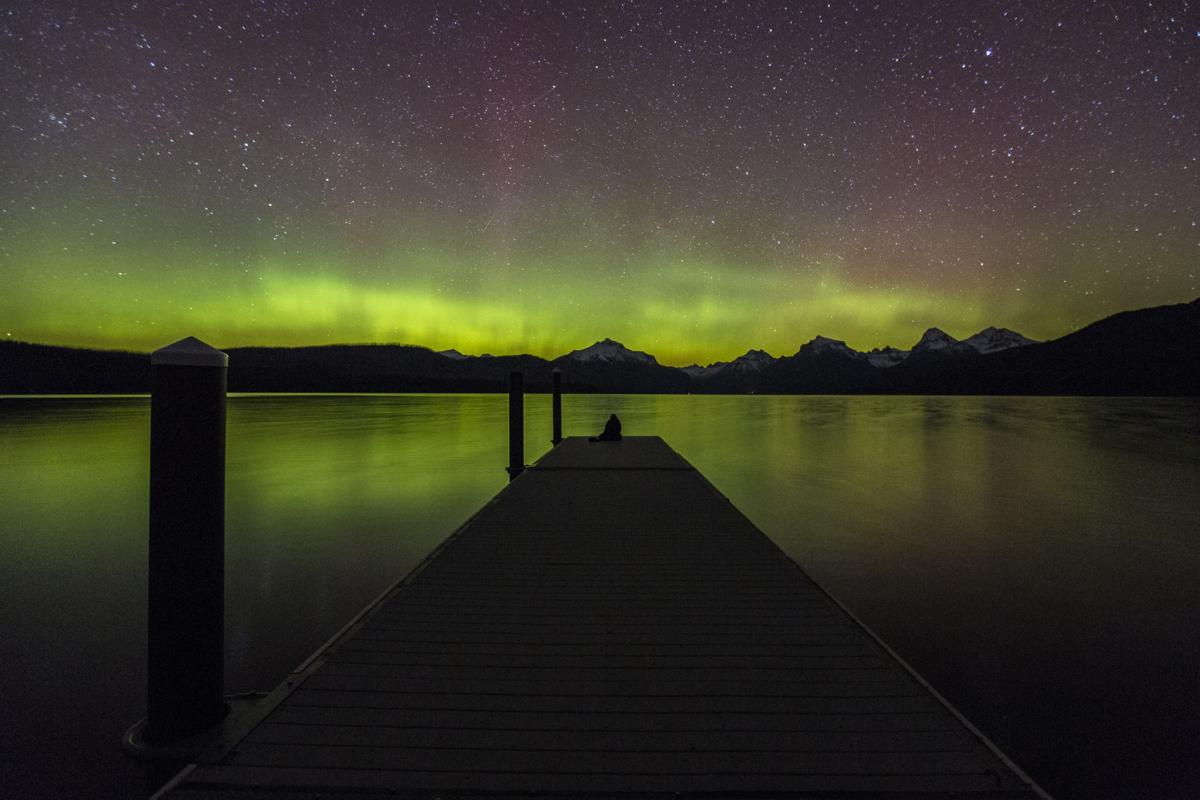 Pictured behind a sandstone medicine rock is the Milky Way.

Shining through the trees in Yellowstone National Park is the Milky Way.

Flowers silhouetted against the night sky in Glacier National Park.

An early morning Northern Lights display off of Highway 3 near Billings in July 2012. The Big Dipper can be seen in the center of this 30-second exposure.

The Taylor Planetarium at the Museum of the Rockies hosts programs on outer space.

The Milky Way hides behind a sandstone Medicine Rock painted with a yellowish light.

The glow from Harlowton lights the trees along the shore of the Musselshell River in Chief Joseph Park. Behind the trees is the Milky Way.

The moon rises over Billings.

Stars surround a hay bale in a field off of Highway 191 .

A hiker looks at the Milky Way in Glacier National Park.

A hiker walks beneath the Milky Way and a meteor shower in Glacier National Park.

Big Sky views, some of which never see the light of day, are an attraction all their own.

The Milky Way, aurora borealis, meteor showers and stars are sights most people in the United States and around the world can’t see because of light and environmental pollution, but that’s not true in Montana, said Joseph Shaw, director of Bozeman’s Montana Optical Technology Center.

“People who live in Montana have the opportunity to see things in the night skies that other people don’t,” Shaw said.

Medicine wheels have a clear view of the sky, horizon to horizon; indicating it’s been a place to observe outer space for thousands of years.

“Montana is a great place to stargaze because we have lots of open sky,” Powers said.

It’s the reason amateur astronomer Joe Witherspoon moved from Tacoma, Washington and bought an 83-acre spread near Twin Bridges after it met his qualifications.

“We checked out the sky first,” he said.

The test he used is a good rule of thumb for anyone who wants to see objects in the sky at night without light interference. Witherspoon waited a half hour while his eyes adjusted to the dark and used the stars for guidance.

“If you can see all seven stars in the Little Dipper, then you have a dark sky,” he said.

Even near Montana’s large cities one doesn’t have to go far to see the stars, said Joel Guthals of Billings.

The president of Yellowstone Valley Astronomy Association Inc., Guthals got hooked on astronomy 15 years ago after a friend asked whether he wanted to see a contiguous object through a telescope.

“I almost fell over,” Guthals said. “What he’d pointed the telescope to was Saturn.”

A contiguous object is two or more planets that appear close together in the night sky. The second planet he saw was Jupiter.

After tiring of traveling to star parties around Montana that involved packing and unpacking a lot of gear, Guthals looks at the night skies from an observatory he built in his backyard, located 15 miles south of Billings in the hills, where the sky is darker and the air is more clear.

The best views are to the east, south and west, he said.

Shaw, introduced to astronomy by his father while growing up in Alaska, said Montana’s higher elevations and dry climate with less water vapor contributes to clear conditions, making it easier to detect the sky’s wonders. He suggests incorporating the hobby on camping trips.

“It’s by far the best way to see the night sky,” he said.

Before spending money on stargazing, be sure you like the hobby, Guthals said.

Read, research online, join an astronomical society or attend star parties where you can try out members’ telescopes and ask questions.

“Many Montana (communities) have some sort of star clubs,” Shaw said. “These people are just geeks.”

Stargazing tools needn’t be expensive, said Witherspoon, who hosts monthly star parties at his Cottontail Observatory when the weather is nice.

A lot can be seen with the naked eye or binoculars, while a downloadable star map includes information specific to that month’s sights. Consider comfort and bring a chair and blanket for meteor showers.

Preserve the dark by having a red flashlight or two handy for looking at maps or recording information. Convert a regular flashlight by covering it with red brake light tape, red cellophane, or a red balloon with the neck off, said Powers, an adjunct MSU earth science professor.

It wasn’t until after reading “NightWatch: A Practical Guide to Viewing the Universe” five times that Guthals bought a used telescope.

What you’re looking for

This year’s most interesting outer space event takes place during the day with a solar eclipse on Aug. 21. Although the best locations to see it along the path of totality are in Wyoming and Idaho, 95 to 97 percent of it can be seen at Twin Bridges and 93 percent in Glacier National Park.

The eclipse’s totality, while lasting 2 minutes and 18 seconds at Driggs, Idaho, is not to be missed, Witherspoon said. It is rare that a total eclipse takes place in the lower 48 states.

“People shouldn’t miss out on this,” he said.

The sun can cause eye damage if any of it is visible during the eclipse, requiring the use of solar glasses, according to website eclipse2017.org. Using a pinhole camera is another option. Without looking at the sun, aim a piece of paper with a small hole in it at a sidewalk or flat surface to observe the star’s shadows.

If viewing the eclipse from the path of totality where the moon entirely covers the sun, it can be viewed with bare eyes.

Witherspoon and Shaw said there are plenty of other phenomena in Montana’s skies to explore, including satellites, the International Space Station, Milky Way and constellations.

For the next five to six years, anticipate fewer chances to see the Northern Lights.

Sun spot activity, which determines frequency of the aurora borealis, occurs in an 11-year cycle. It is at its lowest point or solar minimum. Expect to see aurora borealis two to three times a year on the low end and 10 to 12 times during solar maximum, Shaw said.

It is still possible to see the Northern Lights, like ones reported in early June near Bozeman and Yellowstone National Park, he said. The trick is paying attention to the KP index that measures solar activity. Apps like Aurora send alerts when the indicator is six and higher.

Alignment of magnetic fields, dark skies and solar activity, not time of year, determine when auroras occur or can be seen.

Three meteor showers take place this summer: Delta is July 12 through Aug. 23, with the peak on July 23; the Perseids are July 17 through 24, with the apex on Aug. 11; and the Delta aquariids begin in mid-July and crest July 28 or July 29.

Witherspoon said finding a place to stargaze in Montana is as close as your backyard or as far away as Bureau of Land Management lands or state and national parks. He advises traveling to higher elevations with better vantages above lights and atmospheric disturbances, preferably 30 degrees above the horizon.

“All you have to do is get away where it’s dark,” Witherspoon said. “All most people in Montana have to do is drive a few miles out of town in the country.”

The Beartooth Highway near Sinopah Mountain and Two Medicine Lake is another prime location, as are areas near Deer Lodge, Sheridan and Missoula. Powers stops along Lost Trail Pass near the Idaho and Montana border, and Hyalite Canyon near Bozeman.

“Getting away from the populated areas of the park gives people the opportunity to see the night sky without interference to see thousands of stars they might not be able to see (elsewhere),” Shafer said.

Moonlight walks for viewing geysers and the park’s other thermal features allow them to “see the park in a new light,” Shafer said.

Glacier National Park, known for its dark skies, is another prime viewing spot. The National Park Service suggests stops at the head of Lake McDonald, Saint Mary Lake and Logan Pass to view the Milky Way. The Northern Lights can be seen at Lake McDonald and Goat Haunt.

Glacier National Park and Waterton Lakes National Park were designated as an International Dark Sky Park in April. The park is committed to protecting its nighttime environment for animals with a 67 percent reduction of noncompliant lighting by 2020.

Shaw, whose job is to increase employment in Montana, sees night skies as another economic opportunity. That means it’s a resource that needs to be protected by turning off outside lights at night, repositioning lights to aim at the ground, replacing light fixtures with designs that minimize glare and bulbs approved by the International Dark-Sky Association.

“So many people are coming to visit from places where they can’t see stars,” Shaw said.