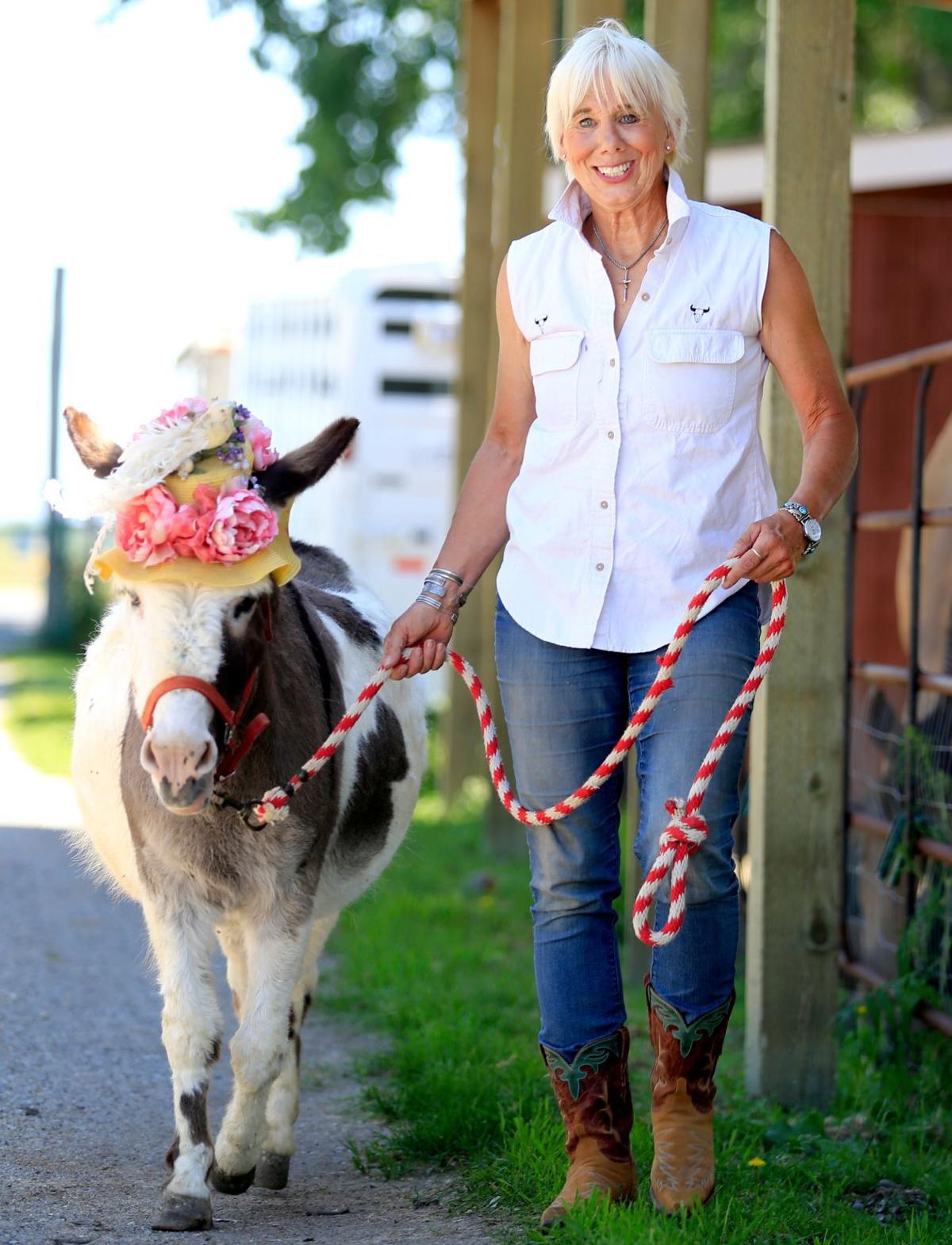 Jonnie Jonckowski walks Blossom the donkey down the driveway. The 63-year-old Angel Horses founder admits she’s been told, “Jonnie, you have amazing stick-to-it-iveness.” 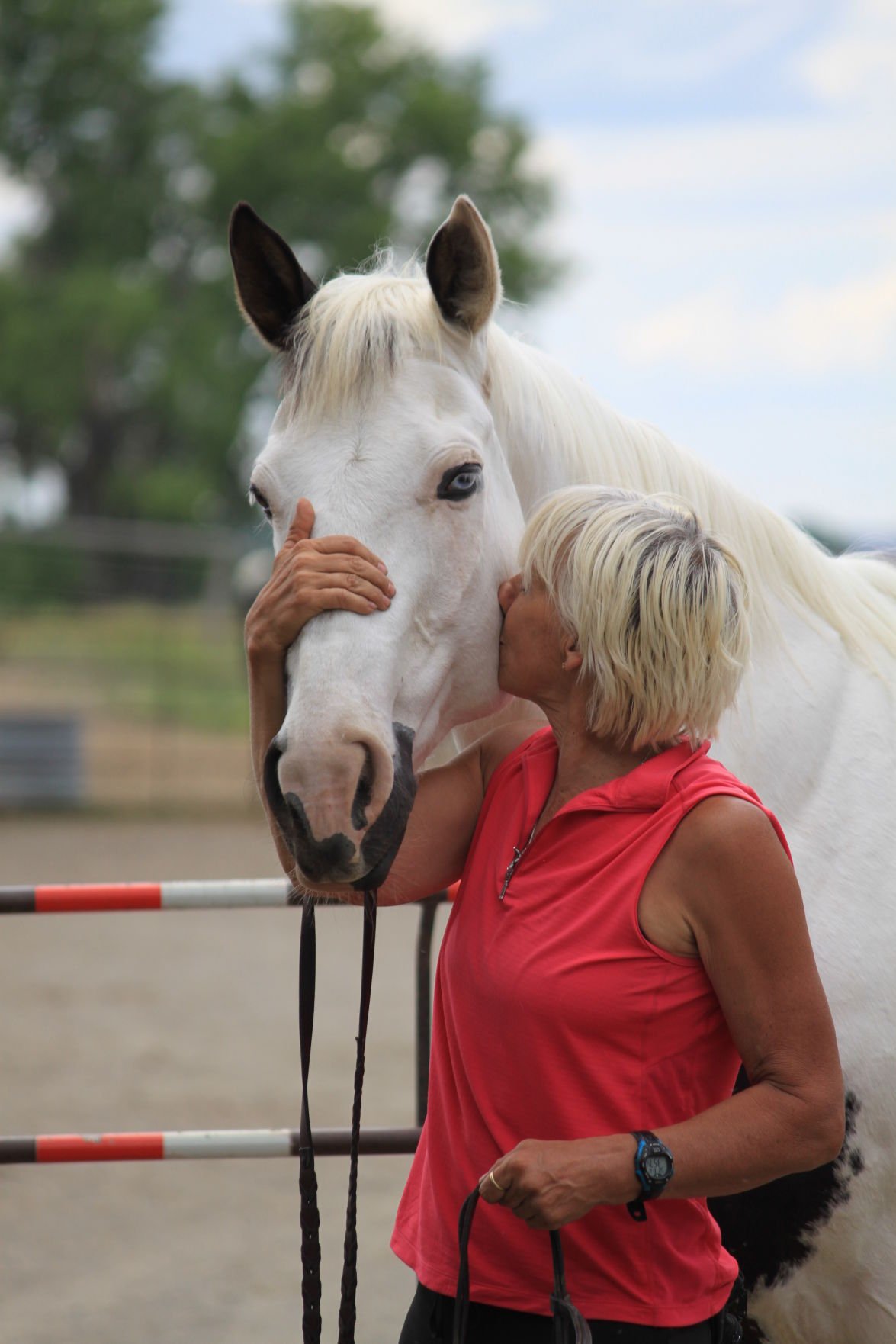 Angel Horses gives back in three ways; the nonprofit rescues and re-homes animals in need and provides an environment for seniors and others with special needs to interact with the horses and donkeys.

Jonnie Jonckowski walks Blossom the donkey down the driveway. The 63-year-old Angel Horses founder admits she’s been told, “Jonnie, you have amazing stick-to-it-iveness.”

Angel Horses gives back in three ways; the nonprofit rescues and re-homes animals in need and provides an environment for seniors and others with special needs to interact with the horses and donkeys.

Helping others has a higher purpose for Jonnie Jonckowski.

Like the work of a missionary, Jonckowski’s Angel Horses resembles religion, and the property, her church.

Huckleberry coffee in hand, Jonckowski delved into the details behind Angel Horses, the nonprofit organization she’s run from her home since 1998.

Jonckowski shares her property with the community, providing sanctuary for seniors and others with special needs who benefit from spending time with animals.

Five horses, two donkeys and a pony live with the former bull-riding champion at the Billings ranch on 348 S. 48th St. W.

Guest activities could be as simple as looking at animals from afar, or reaching out to pet and feed them. Those who are able are invited to ride.

Eeyore the donkey delights guests with a basket on his head.

Most furry residents are rescue animals. Jonckowski often receives requests to take in more animals than she has room for. She refers animals to other safe havens in those instances to avoid euthanization.

An 88-year-old woman in hospice had a similar fear for her horse, Blossom. Blossom’s owner passed away two hours after the nonprofit took the horse in.

Jonckowski likens animals to seniors; both misunderstood and wanting stimulation.

“People are usually in an environment where they’re protected, but they just need stimulus,” she said.

Angel Horses is within 20 minutes of most assisted-living centers. Jonckowski says 80 percent of guests are senior citizens.

The nonprofit is volunteer-run and no one is clinically-trained. Facilities like Eagle Cliff Manor bring their staff to assist clients during visits.

“Kids learn things about their parents that they didn’t know,” she said of the children of the memory-impaired visitors. “A quarter of them, their long-term memory comes back.”

“He had ‘em write for 20 minutes about what was on their mind,” Jonckowski said.

Caserio had the group write again after engaging with the animals.

Appointments are limited to about an hour, and as many as 200 requests are turned down each month.

“We don’t charge anybody for anything,” Jonckowski said.

It’s that mentality that pushed her to transform Angel Horses into a 501(c)(3) nonprofit organization in 2009, opening up more opportunity for donations.

Jonckowski contributes 2,093 volunteer hours and 9,000 volunteer miles annually. She gives the animals all of their shots, worming and trimming.

“I am pretty much the maintenance man, the feeder, the groomer, the scooper,” she said.

Donations and volunteers come in all forms, from Girl Scouts to people like Norrine (Linderman) the Outlaw Queen, a Western singer in her late 80s who entertains guests in the chapel.

“Some of ‘em got out of their wheelchairs and started dancing,” Jonckowski said of Linderman’s appeal to guests. “Almost all of our volunteers are criers. It’s all the little guys that will give everything.”

A stable roof was donated by Western Security Bank’s Hands of Hope corporate giving campaign, and Angel Horses was recently gifted a pickup truck and four-wheeler to replace using a wheel barrow.

Angel Horses’ annual fundraiser is a barn dance and auction of painted horses – this year the theme is colts – at White Aspen Ranch.

The colts can be previewed in August prior to the Sept. 23 event at MontanaFair.

Angel Horses is relocating to 403 S. 56th St. W., a 10-acre piece of nearby property with a heated indoor arena and 12-stall horse barn.

More space means increased services and availability, and decreased weather disruptions. The elements have not only deterred guests but volunteers in the recent past.

“When snot freezes on your nose, volunteers are scarce,” she said.

Jonckowski envisions a mock Western town, a “destination place” where kids can have birthday parties and companies host corporate gatherings. She wants another chapel, a general store, saloon and livery stable. Dog agility courses are not out of the question.

A GoFundMe page has garnered a lot of support for the expansion.

Montana photographer Barbara Van Cleve donated to the cause and wrote, “This is such important, wonderful work that Jonnie is doing for everyone, young and old. Plus the rescued horses and donkeys are pretty happy, too. I hope to give more as time goes on.”

There’s no end in sight for Jonckowski’s aspirations to give back.

“This community is my family,” she said.