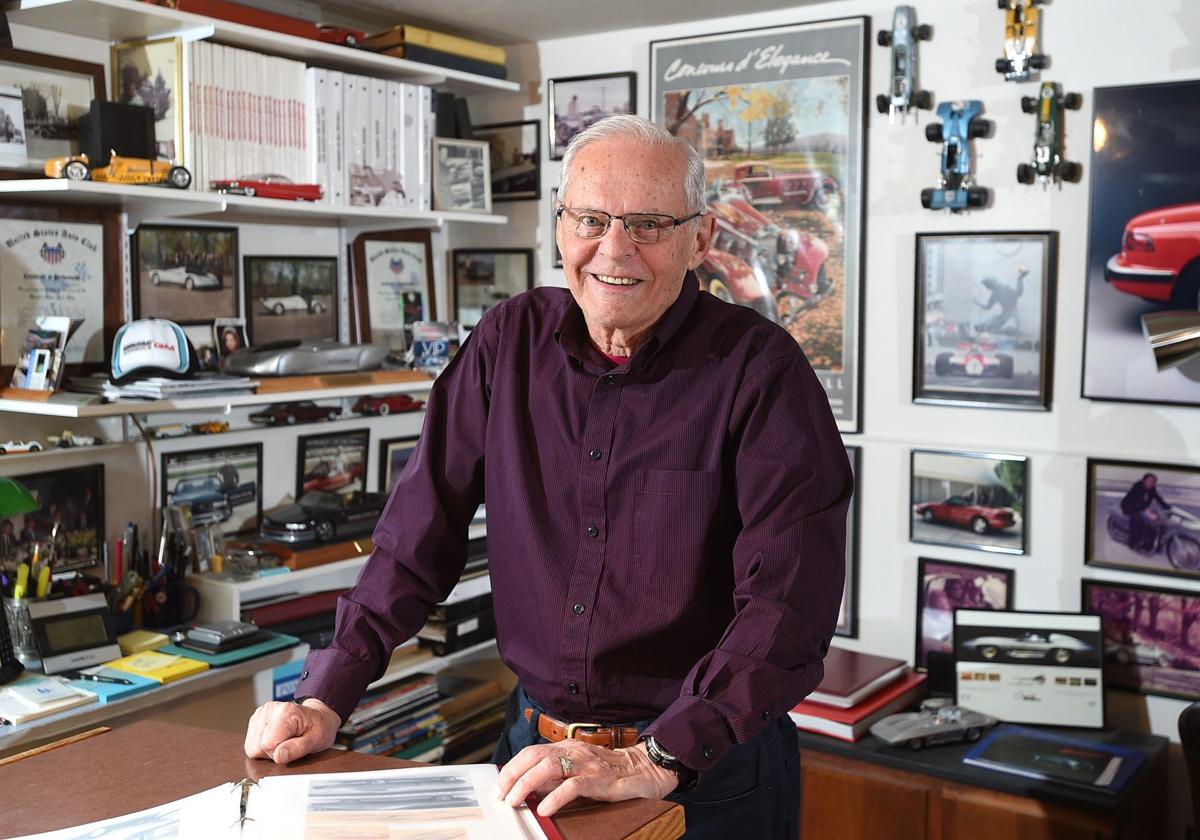 David R. North in the basement of his Billings-area home filled with memorabilia from his days as a car designer with General Motors. 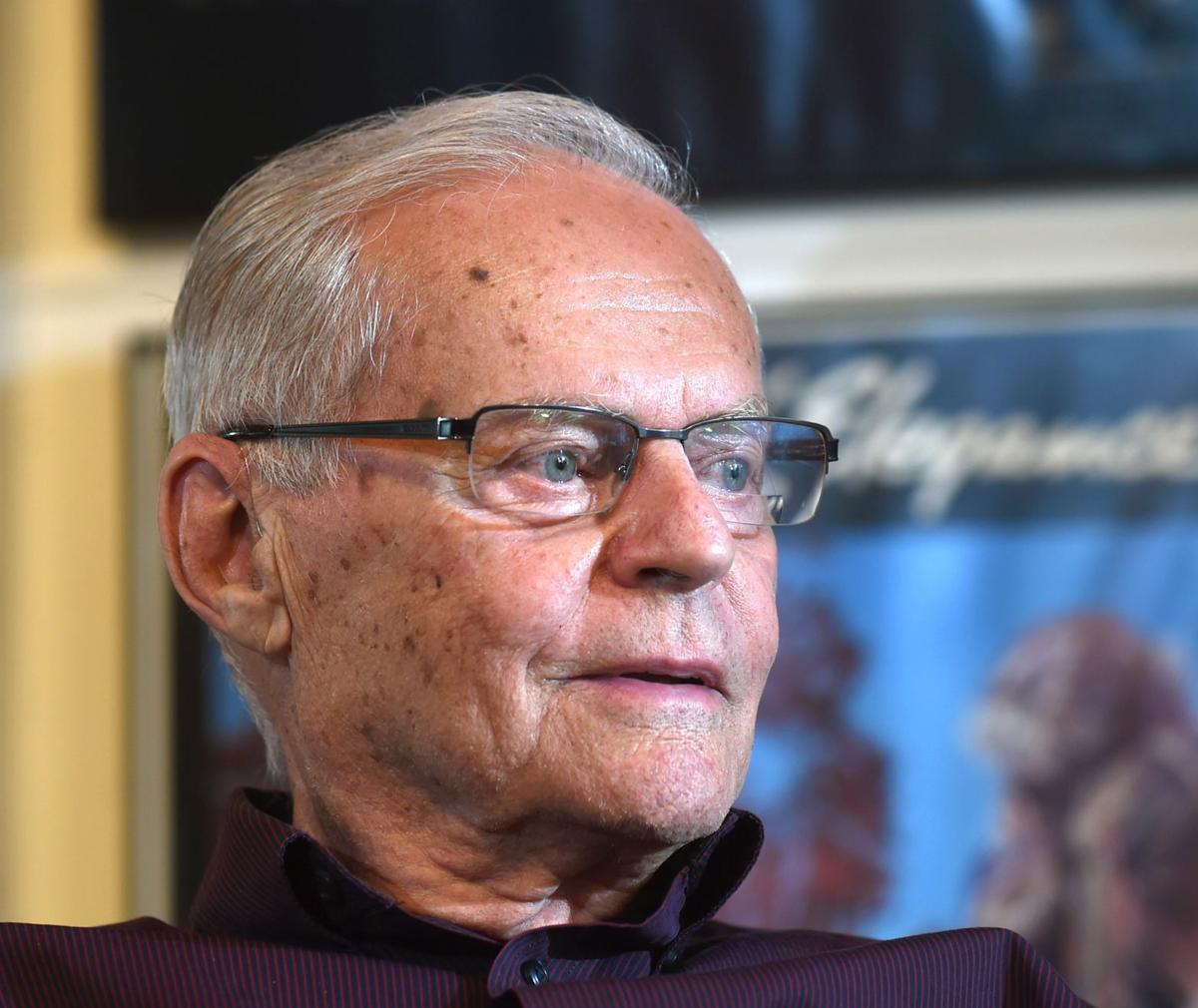 North designed automobiles for GM for 33 years before retiring in 1991.

“The Red Flame,” a drawing by North, later became the Toronado. The drawing, damaged during a lunch hour football game, disappeared for 20 years before being found during a remodeling project at GM. 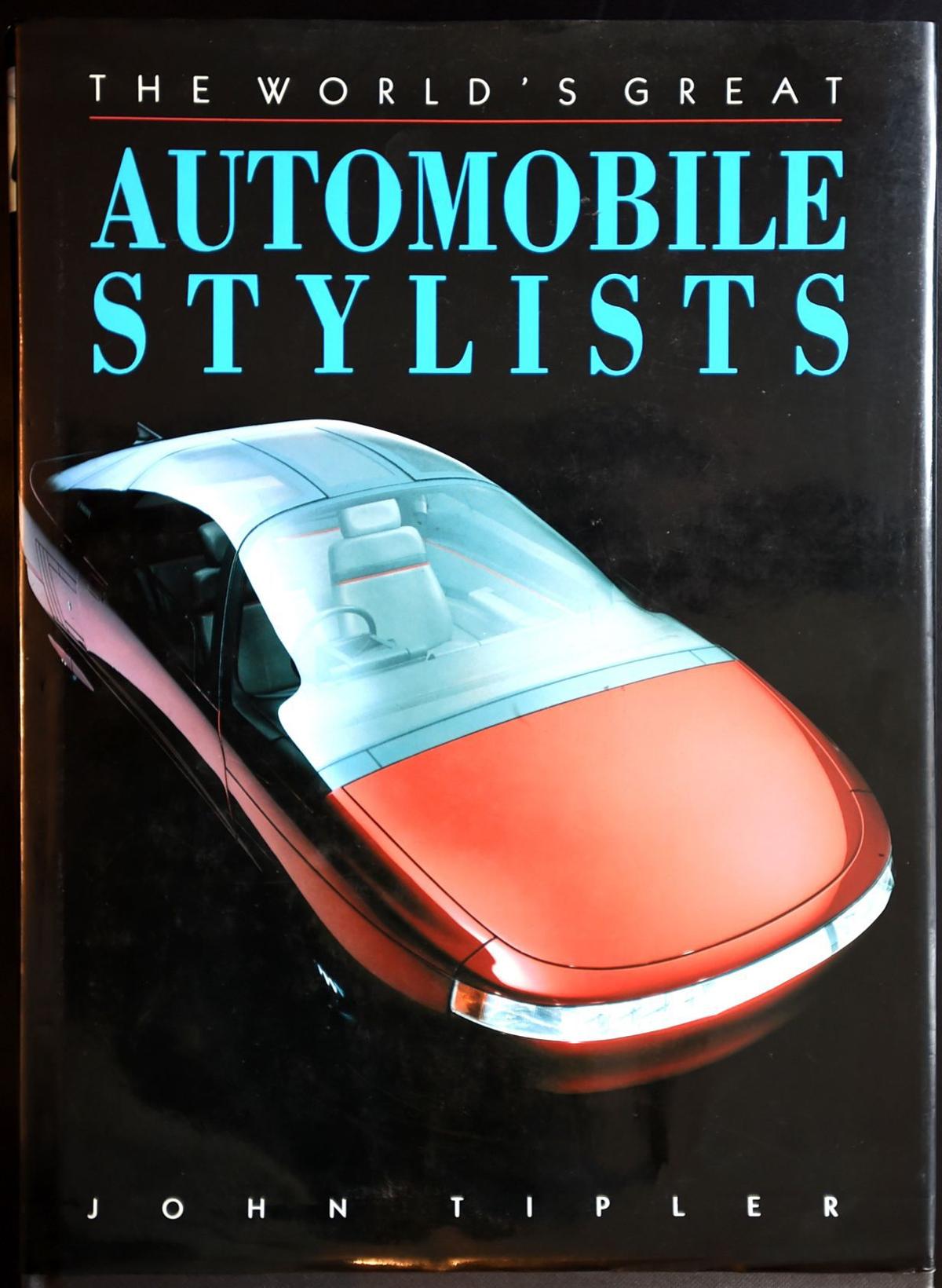 North is included in “The World’s Great Automobile Stylists,” a book about the world’s best car designers. 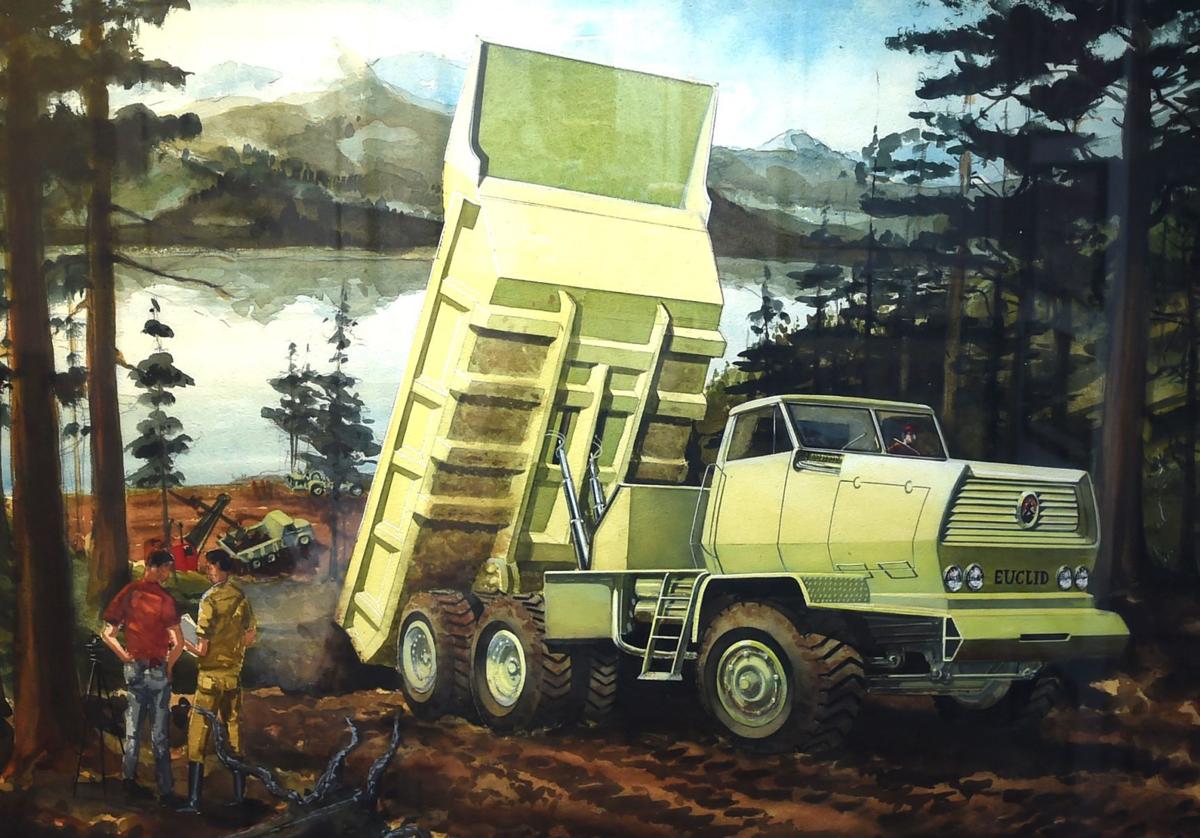 A watercolor from his school days shows North's fascination with vehicles.

David R. North in the basement of his Billings-area home filled with memorabilia from his days as a car designer with General Motors.

North designed automobiles for GM for 33 years before retiring in 1991.

“The Red Flame,” a drawing by North, later became the Toronado. The drawing, damaged during a lunch hour football game, disappeared for 20 years before being found during a remodeling project at GM.

North is included in “The World’s Great Automobile Stylists,” a book about the world’s best car designers.

A watercolor from his school days shows North's fascination with vehicles.

David R. North looked up at the parting message his former General Motors co-workers had welded under the frame of the 1991 Reatta convertible for Pat North, David’s wife.

“We had to put up with him for 33 years, now you’re stuck full-time with him. At least you have a nice ride.”

Next to the gear shift, the GM crew attached a plaque that says “Crafted for P.N.N.”

The car was one of many North designed for GM after the company hired him in 1959 from Art Center School in Pasadena, California, now the ArtCenter College of Design in Los Angeles. North’s credits include the Pontiac GTO, Grand Prix, Oldsmobile Toronado, Cadillac Eldorado and Buick Riviera.

Standing in front of framed photographs in his home, North began his story with a bit of family history. He pointed to a 1917 photograph of his grandfather, Austin North, sitting in an automobile with friend, and sometimes business partner and rival, P.B. Moss, near Moss Mansion.

The men’s friendly competition included trying to outdo one another by building bigger and more spectacular homes. Austin North, who during 1902 and 1903, built The Castle at 622 N. 29th St., was outdone by Moss with the far larger and grander Moss Mansion at 914 Division St., his grandson said.

North, 81, grew up content as the only son of three children born to John and Fae (Eagen) North, knowing he would work for and one day take charge of his venture capitalist father’s business, North Investment Co.

A shared interest in automobiles with his grandfather, who also had “gas in the blood,” and a chance meeting as a teenager with GM Chairman Harlow Curtice, would take him a different direction, though.

Before automobile dealerships, cars were ordered from the back pages of the Sears, Roebuck and Co. Catalogue. Austin North got the idea to solicit the vehicles to area residents, take an order and ship the vehicle to Billings via the Northern Pacific Railroad to the Montana Avenue depot.

Except Austin North liked the cars; when one arrived he’d have it covered and transported to his home, the Stone House, where it was parked. At one time 47 vehicles were in the garage. The limestone structure was located on the corner of what is now Ninth Avenue between North 16th and 18th streets.

Later, when asked by the owner where the promised car was, Austin reordered a new one.

“He loved them and kept them to himself,” North said.

In 1931, the Stone House was sold to the government and the vehicles disappeared. The family suspects they were stolen by people who knew they were in the garage, he said.

A car designer in the making

Teachers told David North’s mother they didn’t know what to do with a dreamer who liked to draw. He had no outlet for his talents since art wasn’t taught in Billings schools at the time. In high school, educators made comparisons to his older sister, Joan, a straight A student.

“Having art talent was a negative in Billings schools,” he said. “You were a misfit going through the schools.”

Pointing to one of his only early works to survive a Michigan house fire, he said art had its advantages for a skinny teenager with two athletic male cousins. North’s drawing skills attracted girls.

His work also caught the eye of Curtice, who’d stopped in Billings to pick up a new Cadillac for a Yellowstone National Park vacation in June 1953 and spotted the youth’s sketches displayed on the dealership owner’s office wall. He wanted to meet North.

Surprised by North’s age, the GM head said people with the 16-year-old’s skills were “paid big bucks” in Detroit. He asked permission to take the drawings to share with design staff, saying North had potential at GM. Until then, North didn’t know artists had a hand in designing cars, assuming engineers were behind the designs.

Later that summer, the GM Styling department sent a package that included North’s sketches covered with overlays and hand-written suggestions for improvements, drawings of the company’s 1959 Cadillac and a letter to his parents recommending he attend one of the country’s top art schools in Pasadena, California after high school.

John North was concerned about his son’s change of plans to pursue art, although North said his father was supportive and proud of his decision.

Father and son agreed that in the future, David would return to Billings to take over the family business.

“He was by far my biggest backer and fan,” he said.

After graduation in 1955, North, who went to Billings Senior High School, married Pat Craighill, whom he met the year before while “burning the point” in Billings. A Central Catholic High School student, she drove a customized car with breather pipes so the family dog could safely ride in the trunk. After marrying, they packed up his hotrod Oldsmobile and drove West.

North’s academic and self-taught artistic skills left him behind his college classmates. When he arrived at Art Center School, he was called into the office regarding his shortcomings.

“That was kind of demoralizing,” North said. The rest of the conversation was positive, but confusing when he was told: “'Luckily, you’ve got talent.’”

That discussion resulted in a lot of catching up for North.

The school’s expectations were rigorous, with faculty dismissing at semester those who didn’t meet standards, keep up or like fellow student, Ralph Lauren, couldn’t afford to pay. North’s competitors were students with far more art training, including some who’d already graduated from Notre Dame and Harvard before enrolling at Art Center School. Futurist Syd Mead and Learjet designer Bill Moore were classmates.

“It was good training because that’s pretty much how it was on the outside,” North said. As a GM designer, if deadlines weren’t met it meant co-workers sat idle.

He was at times tempted to quit, but seeing other students struggling and dropping out motivated North to keep going. He graduated in 3½ years by attending school year-round, seven days a week, by then having a family to support.

“Everything that was a negative…now was a positive,” North said.

Later, while working at GM, his parents’ faith in him was confirmed.

A conversation between his mother and an executive, unlike earlier ones she’d had with his school teachers, took a different tone. The guy pulled her aside and said: “David’s a genius, we’re fortunate to have him.”

The Golden Age at GM

North, like other new designers, started in the Orientation Studio. It was the Golden Age in Michigan, with Motown, movie stars and the Big Three automakers – Ford, General Motors and Chrysler Art Center School – changing the culture of the nation.

Early on in his career while his bosses attended the Paris Auto Show, North sketched a small car at the behest of engineer John DeLorean that would raise his stock in the company.

Inspiration for the sketch hit him while hearing Ford employees talk about the company’s plans for a new muscle car during one of the weekend rotating parties hosted by auto-related industries in Detroit’s 1930s mansions. The Mustang, they said, was backed by company president Lee Iacocca.

When DeLorean picked up the sketch showing the GTO winning a race against the Ford, he asked North to sign it, saying: “Do one more thing and sign your name real big. One of us is getting fired and it’s not going to be me.”

Free-thinking DeLorean wasn’t on the good side of Bill Mitchell, a designer and North’s boss. He covered the drawing, but was stopped outside the studio by security, telling them he had a sketch by North.

“DeLorean just bootlegged that car through the system,” North said.

DeLorean’s maneuver didn’t escape Mitchell’s notice and he ordered North to his office. Mitchell sat with his head in his hands, either from jet lag or a hangover.

“'Who the hell are you?’” Mitchell said. “'What has that sonofabitch DeLorean got you doing?’”

Corporate didn’t know about the GTO until photographs of it appeared in a magazine. In the meantime, the car was marketed to a generation of rebels who opposed the Vietnam War, burning draft cards and defecting to Canada. They targeted the division between the young men and their fathers’ generation who had willingly fought in World War II.

Mitchell told North you can get away with breaking rules as long as money is being made. Marketing the GTO to the young rebels of the Vietnam War generation had paid off.

DeLorean and engineers Russ Gee and Bill Collins are credited with the GTO’s engineering design, with North contributing to its body design, Christo Datini, GM’s head archivist, wrote in an email.

Another of North’s early designs – a drawing dubbed “The Red Flame” that he made in his early 20s using a scarlet air brush against a black background –became the Toronado. The 4,311-pound front-wheel drive vehicle would win the Pikes Peak Hill Climb and be named the 1966 Motor Trend Car of the Year.

The Toronado is a favorite among car lovers, including comic and car collector Jay Leno. In 2006, Leno, who had met North’s son in California, called the car designer. The late nightTV host, his crew and some GM production engineers had put their own spin on the Toronado, transforming it into a rear-wheel drive vehicle.

Leno wanted to know if the car designer was upset that he’d monkeyed with the vehicle’s design, which North wasn’t.

In 1991, after financially-troubled GM offered early retirement to qualifying employees, North, GM’s chief designer, decided it was time to honor his promise to his father. North’s mother had died and his dad worried about who would take over his business.

It was time to return home.

He signed a contract agreeing not to work for another car company or create drawings and continued to consult for GM until it declared bankruptcy in 2009.

North became a member of the Billings Clinic board of directors, a position he held from 1998 to 2007. It took some encouragement from his father for the active North to agree as he was reluctant to sit in meetings.

John North told his son it was payback time.

North has held positions with the Billings Public Library board and a variety of city of Billings committees. He and a group of bankers invested in rebuilding Montana Avenue, and North was involved with a group that convinced Montana Rail Link owner Dennis Washington to turn the Billings Depot over to the city.

The Norths, married for 62 years, have three children, nine grandchildren and two great-grandchildren.

While North no longer draws, he maintains his connection to automobiles. He appears at car shows, like the GM Nationals, celebrating the 50th anniversary of the Toronado in 2016, signing autographs and sharing the history of GM.

Gas still runs through his blood.

“A car is not a device, it’s almost a living thing,” North said. “It’s an emotional attachment.”