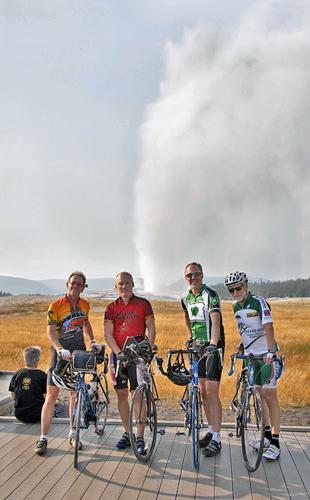 Jeff Welsch, second from left, with friends and bicycles in front of an Old Faithful eruption. 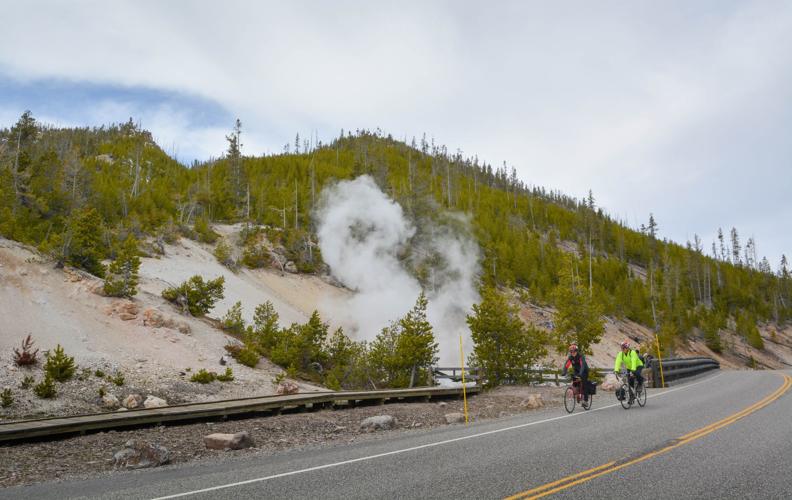 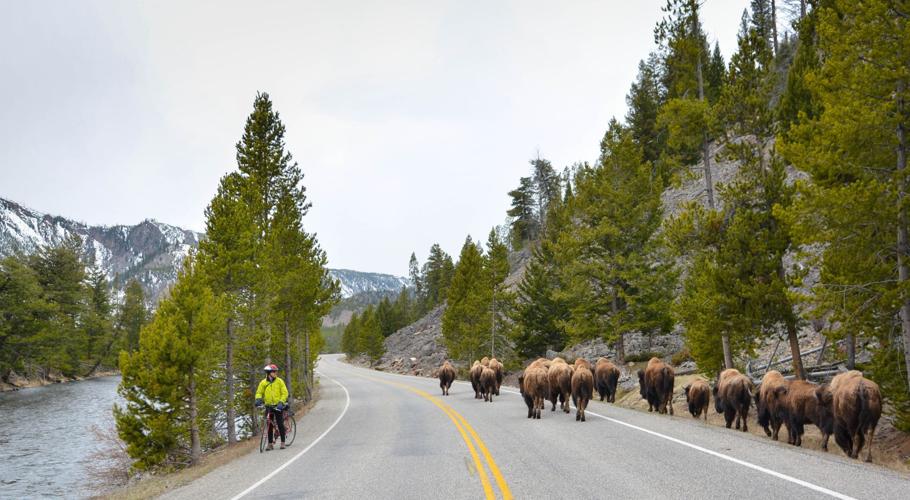 A cyclist stops as a herd of bison passes on the road in Yellowstone National Park in 2013. 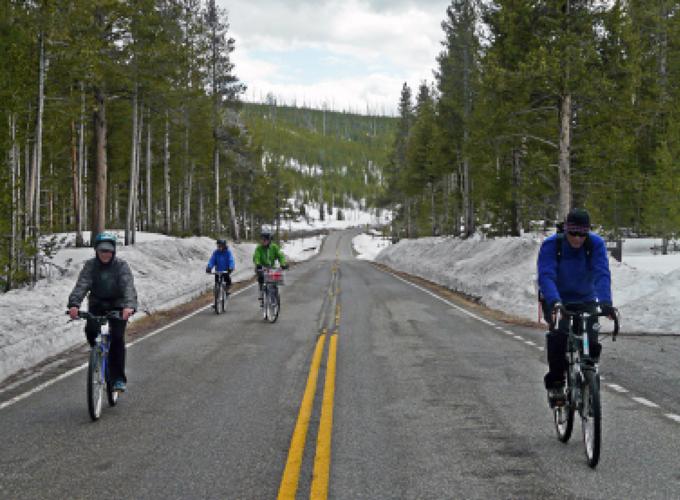 Cyclists pedal near Indian Creek Campground on the road between Mammoth and Norris during the April window when vehicles aren't allowed in Yellowstone. 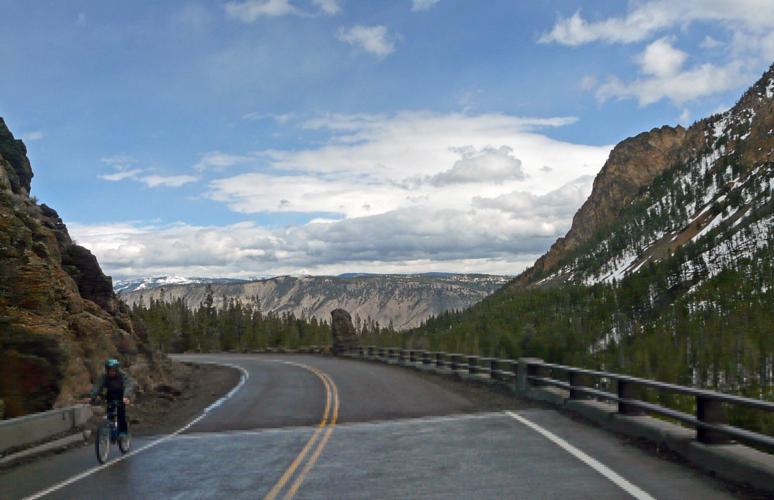 A lone cyclist makes her way up the grade from Mammoth to Golden Gate. 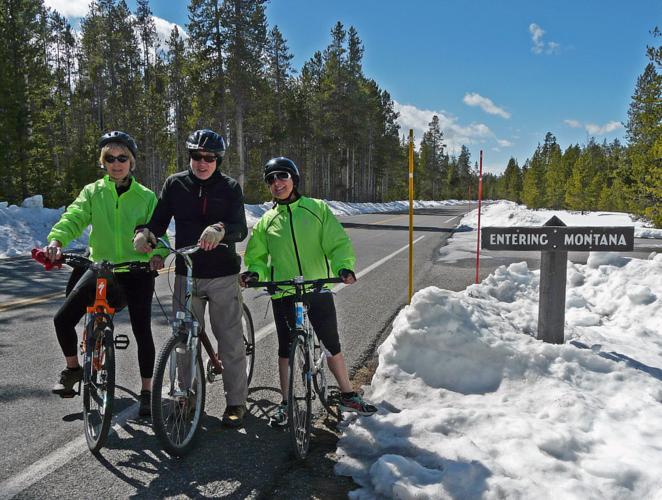 Cyclists from Livingston and Belgrade enjoy a few moments of sun-kissed bliss on the road between West Yellowstone and Madison Junction. 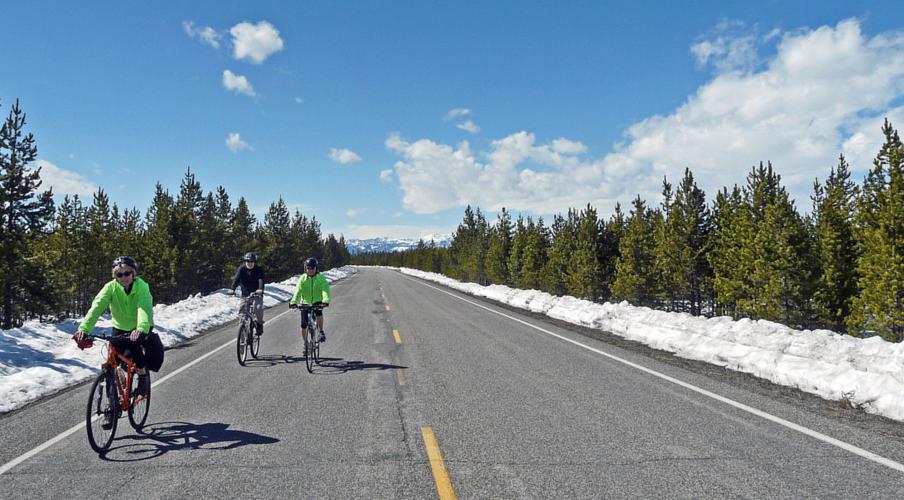 Cyclists enjoy the open road free of vehicle traffic during an April ride from West Yellowstone to Madison Junction.

Jeff Welsch, second from left, with friends and bicycles in front of an Old Faithful eruption.

A cyclist stops as a herd of bison passes on the road in Yellowstone National Park in 2013.

Cyclists pedal near Indian Creek Campground on the road between Mammoth and Norris during the April window when vehicles aren't allowed in Yellowstone.

A lone cyclist makes her way up the grade from Mammoth to Golden Gate.

Cyclists from Livingston and Belgrade enjoy a few moments of sun-kissed bliss on the road between West Yellowstone and Madison Junction.

Cyclists enjoy the open road free of vehicle traffic during an April ride from West Yellowstone to Madison Junction.

Sun-kissed bliss greeted our arrival to a sprawling parking lot known as Madison Junction; we parked our rig and unloaded our bicycles for what had been a long-awaited bucket list moment.

It was mid-August, and I was flush with anticipation when I clicked ny cleats into my pedals. A lifelong mountain and road cyclist, I had ridden the rural farmlands of central Michigan, the rainforests and high deserts of Oregon, and the rugged mountains of central Idaho, among many other places, but never had I put my mettle to the pedal in what I was certain was a road warrior’s nirvana.

Now, after four decades of fantasizing, I was here.

Rock-ribbed National Park Mountain towered above us to the west, and I imagined grizzly bears and wolves hunting amid young stands of pines dotted by ghostly remnant spires of the famed 1988 fires. Shaggy bulls from the nation’s last great wild bison herd snorted and kicked up dust as they rolled in their hallows in a lush sage meadow nearby. Steam rose from vents along the pristine Gibbon River, representing a tiny fraction of the 11,000 geothermal features scattered across the world’s first national park.

The car’s temperature gauge read 72 degrees, as if we'd written the script ourselves.

My adrenaline was fueled even more as we hit the road and immediately eased cautiously past a roadside herd of cow elk – close enough to breathe in their musty aroma – and then soon marveled at the geologic drama of Firehole Canyon en route to viewing our first eruption of Old Faithful.

Afternoon thunderheads building over the mountains spilled into Midway Geyser Basin. A cold rain and jet-blast winds penetrated our thin lycra shorts and breathable jerseys. As we furiously pedaled the 15 miles back to Madison Junction after admiring Old Faithful's show, we were suddenly aware of an endless stream of traffic to which we had been largely oblivious, most notably the bulky Winnebagos and tour buses, all forcing us to alternate nervous glances between the sloshy road ahead and the raindrop-smudged little mirrors protruding from our helmets.

Soaked and shivering to the bone, we re-entered the parking lot and fired up the car heater.

It should have added: “Welcome to Yellowstone.”

As it turns out, our mini-adventure captured the essence of pedaling across one of the world's most extraordinary landscapes.

Few experiences can heighten the senses like riding in Yellowstone, where you see, smell and feel the natural world in a way that isn't possible from a bus, camper, car or Harley. Every bend in the road offers the promise of a gee-whiz moment -- coyotes herding a frightened pronghorn, wolves tugging at an elk carcass, bighorn sheep precariously traversing rock outcroppings -- that you can almost touch. There’s nothing quite like dipping and dodging the park’s famous bear jams without the steely security of an SUV.

Cyclists should heed Yellowstone’s rules requiring at least 100 yards of space from bears and wolves, and 25 from all other wild critters. A football field gap from bison isn’t a bad idea either, lest the seemingly docile beasts get irritable and showcase their stunning brute athleticism to your everlasting regret.

Follow those simple rules and you'll have nothing to fear from even Yellowstone's most formidable four-legged predators.

At the same time, there’s no sugar-coating it: Yellowstone is fraught with four-wheeled danger during the heavy tourist season from Memorial Day to Labor Day, a reality exacerbated by staggering visitation numbers now exceeding 4 million annually. Yellowstone is a zoo all right, but only in the figurative sense. Some of my cycling friends simply don't bother. Even May and September require caution as retirees increasingly savor the park when it’s relatively kid-free and wildlife tend to be more visible (Inside tip: May is a spectacular time to see cubs, pups, calves and other babies.)

Yellowstone’s roads are narrow, winding and bereft of shoulders except where new construction, such as at the Gibbon Falls parking area, has included road expansion. Similar improvements elsewhere will be slow in coming due to a lack of funding, a backlog of projects and the cumbersome process of environmental assessments required for any road alterations.

Stories of cyclists clipped by RV or bus side mirrors remain the stuff of legend.

What’s a cyclist to do? Prepare. Pick your time and spots.

Here are just a few suggestions to enhance the experience and stay safe:

• Pedal early. Other than the dedicated wolf watchers in the Lamar and Hayden valleys who rise before dawn, Yellowstone summer visitors generally don’t get rolling until mid- or late morning. A dawn ride, though potentially chilly, offers relatively uncluttered pedaling. As a bonus, wildlife are most active before mid-day heat settles in.

• Know the roads. The five miles between Madison Junction and Gibbon Falls appeals because traffic is modest compared to the road to Old Faithful; the new pavement is smoother, and there are few other places in the park where the shoulders are so broad. For wildlife lovers, the Lamar Valley also has relatively modest traffic, and visibility for drivers is excellent. For my money, Tower Junction to Cooke City is the most exhilarating and safest route, even the thickly-forested uphill stretch from Round Prairie at the far eastern end of the Lamar to the park’s northeast entrance.

• Ride in the spring and/or fall. Among locals, the skinny windows in April before cars are allowed on park roads and in November after they’re closed to motorized traffic are eagerly anticipated. Weather certainly can be fickle, but having the park to yourself is a cyclist’s ecstasy that shouldn’t be missed. November is the ideal time to bag the otherwise-sketchy Dunraven Pass climb from the north; October is excellent, too, because even though the road remains open to vehicles, traffic is typically light; and it’s a great time to ascend Dunraven from Canyon Village and take in the vistas of the Absaroka Mountains to the east.

As conditions allow, roads open to cyclists only in April are from Mammoth Hot Springs through Madison Junction to West Yellowstone, the south entrance to West Thumb, the brief-but-breathtaking climb from the east entrance most of the way to Sylvan Pass, and the even briefer ride from Tower Junction to Tower Fall.

Travel in groups and bring bear spray. Legend has it that one April day, a utility truck driver and passenger were marveling at the speed of a road cyclist cresting a hill when they quickly realized why the man was pedaling with such fury: A grizzly bear, perhaps recently awakened from its winter slumber with its stomach growling, was sprinting in hot pursuit. The crew rescued the shaken cyclist.

• Wear appropriate safety gear. A helmet is a must, but a mirror, high-visibility clothing and flickering red taillights are essential, too.

• Ride a mountain bike. In part to preserve the park’s integrity, protect its wildlife and because 90 percent of Yellowstone has been “recommended wilderness” and thus off-limits to mechanized use since 1972, the park has limited fat-tire options. This is certainly a way to avoid four-wheeled traffic – and potentially see four-legged traffic.

Yellowstone has 13 routes open to mountain biking, though none are longer than six miles. The best, depending on your physical capabilities: the old Bunsen Peak Loop road near Mammoth (moderate), gravel Blacktail Plateau Road between Mammoth and Tower Junction (cars are allowed one-way; cyclists can pedal this moderate route in either direction), Mount Washburn from Chittendon Road at Dunraven Pass (strenuous) and Natural Bridge near Bridge Bay (a paved and easy single mile). The gravel Old Gardiner Road between Mammoth and Gardiner also promises solitude and allows pedaling in both directions, but watch for the occasional car descending one way from Mammoth.

• Expect any kind of weather, at any time. Snow has fallen in every month in Yellowstone. Sudden rain and lightning storms are frequent in the summer, dramatic temperature drops are common, and hypothermia is a threat not to be ignored. As the old saw goes, you can’t add or peel off layers you don't have.

We learned that the hard way on that mid-August day. It went from sun-kissed to rain-drenched in a heartbeat.

Yes, we had watched the Park Service video about pedaling in Yellowstone, and you should, too. But we were teased into giddy complacency.

Lesson learned. I have returned regularly to refill my bucket of dreams without incident, thanks to heeding Yellowstone's literature and veterans of pedaling in what truly can be a road warrior’s nirvana when you're properly prepared.

(NOTE: if the idea of pedaling Yellowstone still seems overly daunting, start with a visit to its sister park to the south, Grand Teton, where a system of paved trails facilitated by Friends of Pathways combines breathtaking beauty with peace of mind, most notably on an easily-navigated bike path from park headquarters in Moose, Wyoming, to one of the park's watery jewels, Jenny Lake.)