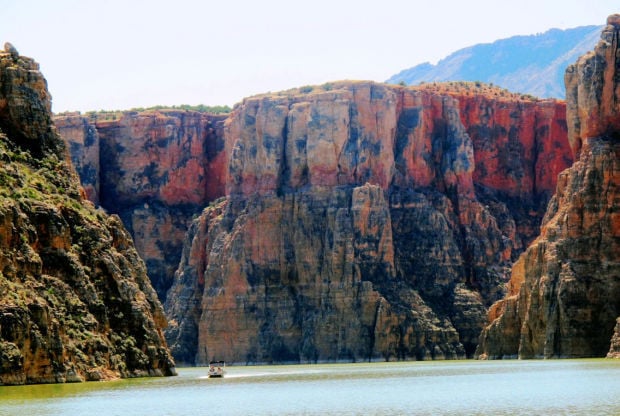 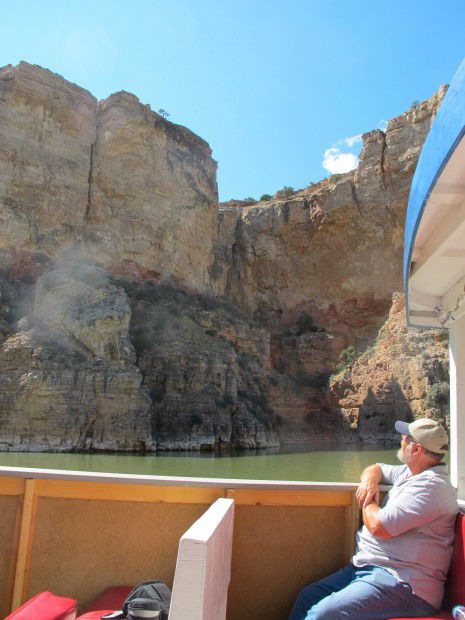 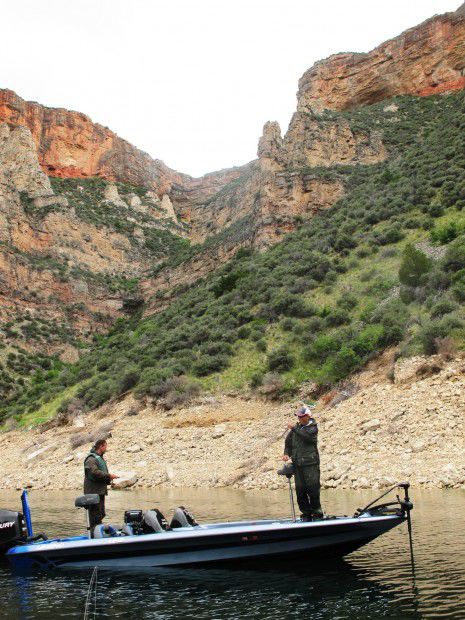 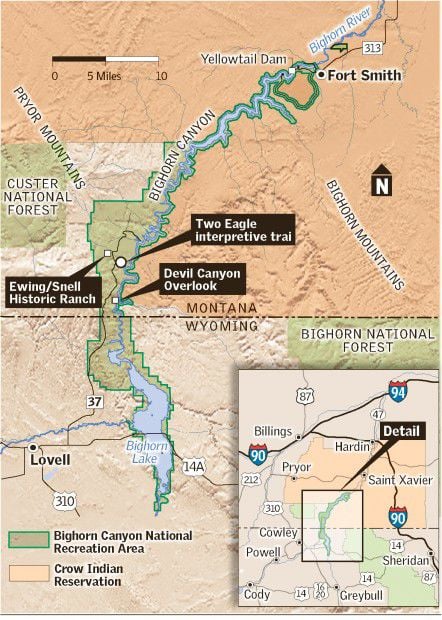 For more than 10,000 years people have been trekking to Bighorn Canyon. Those early travelers, just like the ones today, were camping out, marveling at the scenery, and maybe enjoying the mild winter climate.

The American Indians who first visited the area walked along Bad Pass Trail, a route that provided access between the plains of what is now Eastern Montana and the Bighorn Basin in Wyoming. Visitors to Bighorn Canyon National Recreation Area can still travel the same route and see a rocky, dry landscape that’s still fairly unmarred by humans.

Created in 1966, the recreation area is quite possibly one of the best kept secrets in Montana and Wyoming. The 60-mile long canyon stretches across both states, channeling the Bighorn River north to its junction with the Yellowstone River in Montana. Now flooded by Yellowtail Dam to create Bighorn Reservoir, the winding waterway provides views of spectacular cliffs rising 1,000 feet or more to the rim.

The scenery is popular with sea kayakers, the occasional canoeists, houseboats and motorboats. They come to water ski and wake surf, camp and fish for the reservoir's plentiful bass, walleye, catfish and native sauger, along with the occasional trout. Those who don’t own a boat can sign on for one of the Hidden Treasure Charters tours on the south end of the lake, or rent a boat at Ok-A-Beh Marina on the north end.

“I did a full paddle of the lake a couple of years ago,” said Christy Fleming, chief of interpretation at the recreation area. “We could have done it in three but we wanted to hang out at Black Canyon for a day.”

Black Canyon is one of the most popular water-accessible campsites on the north end of the lake. It won’t open, however, until the reservoir’s water is low enough to reveal the beach. The canyon is known for having a healthy population of black bears.

“I could hear them sniffing outside the tents,” Fleming said. “At first I thought it was my husband snoring.”

The downside of the trip is that someone has to pick paddlers up at the end of the route. Driving around the reservoir is a 180-mile tour south and then up and over the Bighorn Mountains, or about 160 miles if traveling north and through the Crow Reservation. Either way, it’s a bit of a circuitous route.

Fleming recommends that paddlers visit in the middle of the week when there are fewer motorboats. Three boat launches line the lake. At the north there is the Ok-A-Beh Marina, accessible from the south is Barry’s Landing and Horseshoe Bend, which is only usable after the water level climbs in the early summer or late spring, depending on runoff.

Those seeking a dryland experience can find a variety of hikes in the recreation area.

“On the northern end, one of my favorite trails — and anyone can do this walk — is the hike to the old headgate,” Fleming said. “It was put in in the late 1900s to irrigate the Crow tribal lands. The old stone structure is still there.”

The historic feature is only visible at low water flows, otherwise it’s underwater.

On the south side of the recreation area Fleming said the 1.8-mile (roundtrip) Upper Layout Creek trail is a scenic walk.

“We don’t have epic long trails in the park,” she said.

She also recommended the Sykes Mountain Trail, a route that provides an overlook of the canyon and the Horseshoe Bend Recreation Area. It is a 4.6-mile roundtrip hike.

“There’s some sandstone, but once you get up to the top it’s good,” Fleming said. “I would take my parents on that one. They would hate me but I would take them.”

A complete list of the park’s 15 hikes can be found on the recreation area’s website, including the short Two Eagles Interpretive Trail that provides visitors a chance to see some of the stones gathered hundreds of years ago to hold down American Indian's tepees.

Two things to watch out for while hiking in the area include rattlesnakes in rocky areas and poison ivy in wet places.

For those folks just looking to take a Sunday drive, the canyon’s south end provides access to historic ranches, canyon overlooks and possible sightings of bighorn sheep or wild horses from the Pryor Mountain wild horse herd next door.

In May the bighorn sheep lambs may be visible along the southwestern end of the park. Photographers have also captured shots of bobcats roaming the cliffs of the canyon.

“There are so many cool things in this area,” Fleming said.

She should know, she grew up in nearby Powell, Wyoming, and has worked for the recreation area for 20 years. It’s a landscape that can look sparse, parched and even threatening in the aptly named Devil’s Playground. It may be an acquired taste for some, but those who explore the area’s nooks and crannies won’t be disappointed.

What’s more, depending on the time of the year, it can seem like you have the whole place pretty much to yourself. That’s hard to find these days.